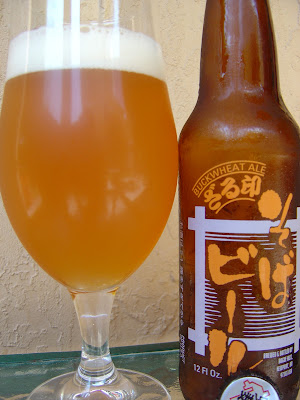 Today I'm drinking Rogue Buckwheat Ale brewed by Rogue Ales in Newport, Oregon. The entire label is decorated in orange and tan Japanese lettering. Not sure what the purpose of that is, but around the cap it says, "If you can read this, you need to drink a beer." I really have no idea what buckwheat is besides an SNL character played by Eddie Murphy, but I guess I'm about to find out.

Interesting aroma, different. Hoppy and sweet fruit at the same time along with some toasted wheat. Lemony citrus start, again sweet and hoppy concurrently. Wheat texture is apparent. This may be a tad too harsh, but the middle is weird, with manufactured plastic flavors. After a few sips, this beer reminds me in some ways of a pilsner, but with fruity apple.

The carbonation is high and a bit harsh and hard to swallow. You finish with a metallic cleanser finish. It wasn't horrible. It was interesting. However, I'd pass and pick up a dozen or more other Rogue beers first. 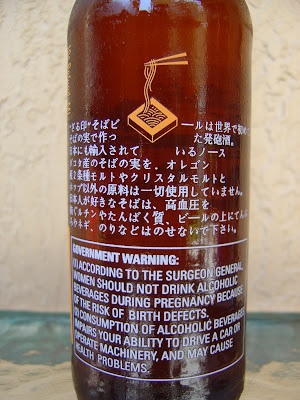 Update, later the same day... I asked for a translation and got these awesome replies. It's broken up because of the Twitter handicap:

JustinLPhillips
Front: "Zaru brand" Soba beer.
Back: Zaru Brand Soba Beer is the world's first beer made from soba.
only buckwheat and two types of malt and crystal malt from Oregon and hops are used.
soba, which is beloved by the Japanese contains Rutin which prevents High Blood Pressure, and protein.
please don't put tempura, spring onions or dried seaweed on top if this beer.

soba=buckwheat noodles. Zaru=a bamboo strainer that soba is served on.
the bit about the tempura and onion are a joke as these are traditional toppings for soba.

Posted by Beer Drinker Rob at 8:54 AM