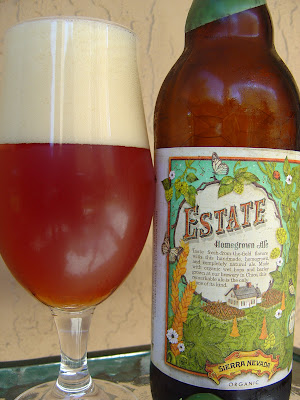 This morning I'm drinking Sierra Nevada Estate Homegrown Ale, the 2011 vintage, brewed by Sierra Nevada Brewing Company in Chico, California. I had the 2010 version last year and was blown away with its awesomeness, despite the price, so I eagerly anticipated its return this year.

So a week or two ago I was standing and staring at the shelf at Total Wine and a guy next to me asked if I had seen this beer. I told him it's not on the shelf and not sure if it had arrived yet. That's when he told me there was a case above the shelf and introduced himself as the Sierra Nevada Area Manager for South Florida. He had one of the Total Wine guys get the box down, and he and the Gold Coast guy stocked the shelves.

I grabbed mine for $10, which is $2 less than last year, totally awesome. And I found $5 in the parking lot on the way in. So I felt like this was destiny! Sierra Nevada Manager Andrew proceeded to rave on and on about this beer, about its hand dipping in green wax, and much more. Like I needed convincing.

Of course they use all organic, homegrown ingredients to create this Estate Ale, a very impressive feat. The label calls this a wet hop ale and tells two separate stories about how the beer is created. Finally, the art work is really great. I think it's the same as last year but the colors and details make for a beautiful label. 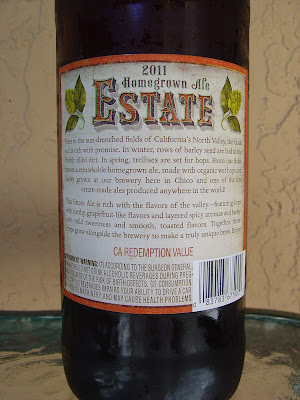 Nice fluffy head. Lots of fresh pine dabbled with some sweeter orange aromas. Fresh, lovely and inviting! The flavors are a little more bitter than the aroma might lead you to believe. There is a ton of pine, loads of grapefruit and lemon citrus rinds. Quite hoppy--earthy, grassy, outdoorsy and very fresh.

Yet at the same time balanced. The bitterness wins, but it's not an aggressive bitterness. Balanced with some sweet orange fruit and bread dough maltiness. Perhaps a little spice and a nip from the 6.7% alcohol add some interest toward the end. The mouth texture felt a little oily in the beginning but was mostly creamy with excellent, fine carbonation.

Man, this was fabulous. I'd suggest you grab a bottle before they are all gone! Word to your mother!

Posted by Beer Drinker Rob at 8:50 AM