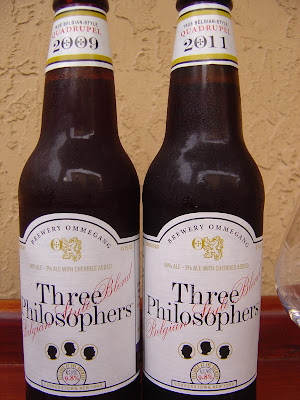 Today I'm doing a side-by-side tasting of Brewery Ommegang's Three Philosophers 2009 and 2011 vintages. It's been a while since I sipped on this nectar of a beer, but it is a memorable favorite. I even wrote an homage to it back a few years ago.

Except for the year on the neck of the bottle, the labels are identical. 98% ale plus 2% Kriek blended. Both 9.8% alcohol. Serve at 50 degrees F.

I tasted both vintages side-by-side after an extensive two-tweet search to see if that would be the best way to approach this tasting. Kevin from The Foaming Head blog jumped in immediately with some first hand experience and recommendations from tasting multiple vintages of this beer. Check out this lineup of Three Philosophers--actually looks like Plato and Aristotle blabbed about the tasting on their Facebook pages and ended up with some of their understudies there! Socrates must have been pissed to see Seven Philosophers!

When I opened the bottles, the first thing I noticed was a bigger pop from the 2011 bottle. After I poured both, it was apparent that the 2009 version had lost some of its bubbly and, at least visually, was a little flatter. The aromas were very similar, indistinguishable. Tart cherries bathing in a boozy sweet bath of caramel and fig newton puree. Yeah! I know. Hard to believe right? Try it. 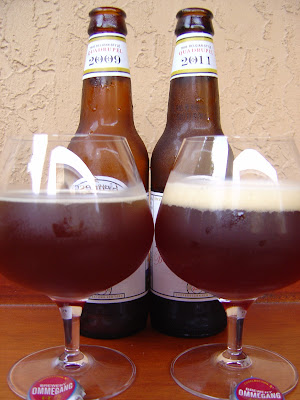 Indeed the 2009 bottle was a little flatter, but not flat. Both exhibited some flavorful fruity raisins and figs and of course cherries. There were some differences, however. The 2009 version was not as fresh, and it was obvious. The tartness from the cherries was not bursting in your mouth, a major highlight of my 2011 bottle. Yes, both had a caramelized sugar sweetness that was prevalent, but the 2009 bottle seemed to be more of a mish-mash of indistinguishable sweet flavors. I much preferred the noticeable 2011 bottle's fruits and brown sugar and cinnamon spiciness, working together yet with flavors that stood out on their own.

The second major difference was how the 9.8% alcohol played out. In the 2009 bottle, it was subdued and incorporated, and while providing chest warmth, not really a huge contributor. In my 2011 bottle, however, it provided a litle burn and really helped balance the sweet flavors of the beer. I missed the bite in the 2009 bottle. The yeast was noticeable in both. And the brandy and rum-soaked fruit flavors played major roles in each bottle.

In the end, I preferred the newer bottle. I liked the bigger carbonation, the freshness, the amped up cherry tartness and the alcohol bite from 2011. I realize that some of those components are the reason why bottles are aged in the first place. But for this particular beer, smoothing out the awesome fresh version was not a positive. Perhaps 5 or 6 years of age is the perfect time, but I doubt it since I can imagine the progression. 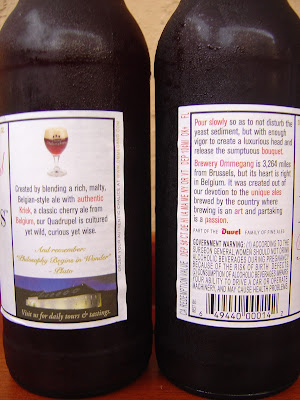 my mouth watered while reading that. love that beer

Yeah, it is such a nice beer all around. Great tartness and spiciness and caramel and yeast and alcohol and...

Very interesting. I'm holding onto a 2007, I heard this one ages very well.

I usually don't like much alcohol bite, but I have been known to enjoy a fresh 3 Philosophers. I figured I'll enjoy the aged bottle better, but who knows, I might reach this same conclusion. Aging beer is such an inexact science.

I actually did buy this one two years ago, but the funny part is that until this new Total Wine guy started at my store recently, I could count on finding some older bottles on their shelves. Granted, his redesign and organization and better shelf labels, etc. was good for their business. It was just crappy for me since I already know where everything is! LOL.

I've never had this beer, but I have a bottle of 2011 at home. AFter reading your review, I'm anxious to get home and try it.

Awesome, Dale. Let me know what you think. It really is a great beer.