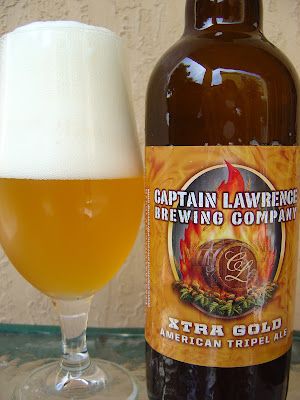 Today I'm drinking Xtra Gold American Tripel Ale brewed by Captain Lawrence Brewing Company in Pleasantville, New York. This wine-sized bottle came home with my traveling coworker in April from his trip to New York City.  Thanks again! I was saving this for our quarterly social media beer group's tasting. But I'm not anymore since it's now basically defunct!

The label shows a barrel in front of a roaring flame. Might be the brewery logo or something. They really could have stepped up the presentation a notch or two. On the side you will be drawn to the fact that this won Gold at the 2008 GABF. How awesome! A story from brewery owner Scott Vaccaro explains why this is an American Tripel and is brewed as a tribute to the Belgian style of this beer.

Now let me tell you a little story about opening this beer. POP! And then the beer looked like the Diet Coke with Mentos experiment for the next 20 seconds. Surprised the hell out of me and after I'm done here I have a freakin mess to clean up outside before the army of Florida insects starts to make a run on my patio. HALF of the wine bottle gone. My next thought was that the entire bottle was bad or infected, but that didn't stop me from checking out what was left. 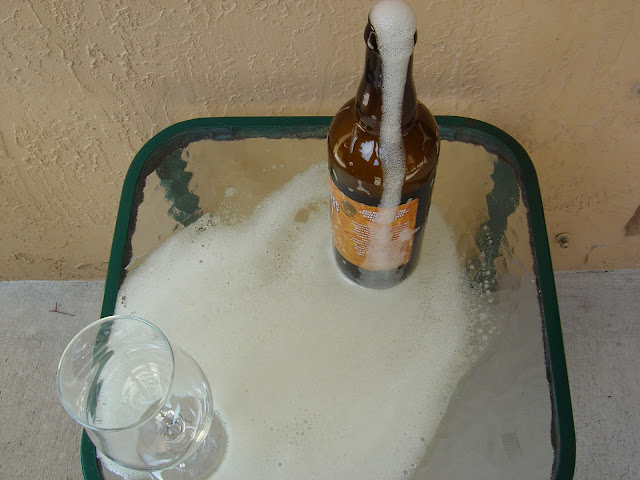 Fruity peach, quite tropical aroma. Honey sweetness too. The aroma carries over to the flavors. Sweet fruity peach and pineapple and orange are dominant from the beginning. There are, however, unmistakeable citrus and tart components, even a little yeasty and funky. 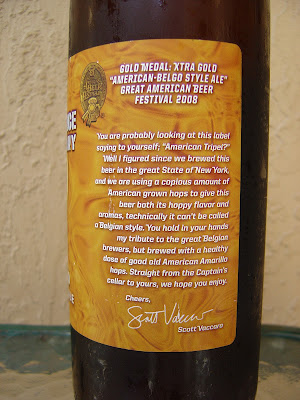 The alcohol in this beer is big. The boozy accent to the fruit was really quite awesome and the burn in the throat was low-grade enough to be a welcome piece of the equation. The carbonation had a nice creamy fine texture, at least that is when it was contained to the glass. Some hoppy and spicy black pepper creeps in toward the end. Big yet nice balance. Great fruity flavors work in harmony with spice and alcohol to make a quite enjoyable beer.

And now... the Rest of the Story. As much as I enjoyed this beer, I was extremely disappointed in the way it gushed from the start, wasting at least half of the bottle. This beer was quite an expensive bottle. If I recall, $14 at Whole Foods locally in New York City makes for a pretty hefty price tag. And then to only get half of the product? The bottle sat idle for only 5 months in a cool home in the dark. It was cared for like all its pals that sit in the same box. The way I see it, I'm due for half a refund or another bottle of the beer! I wouldn't buy it again as the risk of paying more than $1 per ounce is too great. AND I don't usually need to get out the hose and sweat outside as part of my beer drinking rituals. It's 92 degrees today! And now you know the Rest of the Story. 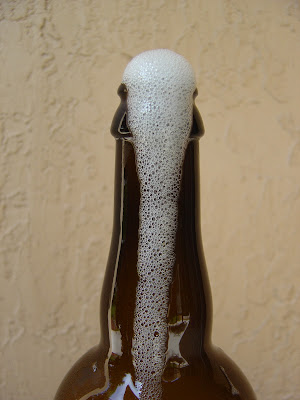 The Triple Agent: The al-Qaeda Mole who Infiltrated the CIA

Posted by Beer Drinker Rob at 8:50 AM

Next time you get a gusher start pouring into a glass immediately. This usually will calm it down and save you a lot of beer lose.

I was so shocked that I didn't do that immediately. And I wanted a picture, too. LOL. But the gush lasted so long that I was pouring while it was still happening. Ran out of room in my glass and that overflowed too. Damn it!

Captain Lawrence, wow, now there's something you don't see every day around here. Would have loved to try this one!

This was the second time my traveling friend brought home a bottle of Captain Lawrence from a NY trip. The other time I did a guest post with St. Vincent's Dubbel on Laurie Delk's website. I was hoping she'd autograph this poster for me as a reward. My fingers are still way crossed! http://www.dailybeerreview.com/2010/05/st-vincents-dubbel.html