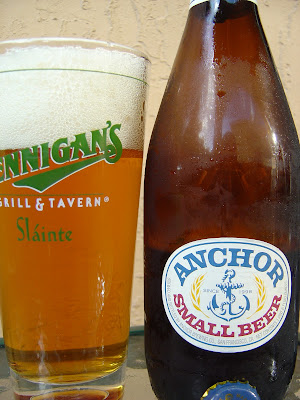 Today I'm drinking Anchor Small Beer brewed by Anchor Brewing Company in San Francisco, California. So let me deal with the irony first (I bet Alanis Morissette would find this funny). Small beer is in giant-sized Anchor shaped 22 ouncer. The story of this beer is on the neck label in about 4pt. font while most of the bottle was available to put it somewhere else. Very difficult to read because of the size and the fact that the story kept wrapping around the circle. Poor planning!

But I did read it and learned that small is what historically meant the second lighter and weaker beer from the same mash. For Anchor, the first beer is Old Foghorn Barleywine. And what I'm drinking is the second beer. Anchor refers to brewing this beer as "reviving an ancient brewing tradition, which is something of great importance."

Big head. Very weak aroma, hard to pick anything out, but I'll guess grain and hops. Thin and watery, beyond even my expectations. A neutral flavor start turns lemony and astringent bitter fairly quickly. Grassy, herbal tea. Way bitter, harsh and not nice. Dry metallic finish, pretty unpleasant. The carbonation is high and kind of makes the bad worse. I wish I could at least say it was somewhat refreshing but I won't. Yes, I could finish all of the Big Bottle, but why? Not a good beer. Very disappointing from a great brewery.

Posted by Beer Drinker Rob at 9:54 AM