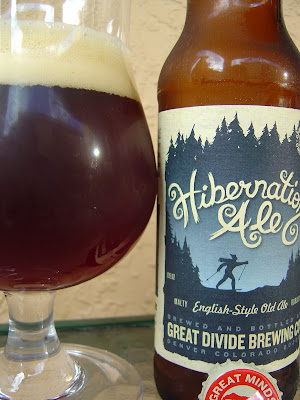 Today I'm drinking Hibernation Ale 2011 brewed by Great Divide Brewing Company in Denver, Colorado. Each year since 1995, these guys have brewed this beer as their winter seasonal. I've had the pleasure of taking part since 2009. I believe the label has remained the same, depicting a cross-country skier speeding through a mountain forest. And she's really cruising too, as her scarf is flowing behind her. This English-Style Old Ale was bottled on October, 19, 2011 and is suggested to be paired with Roomano (aged hard Dutch cow's milk cheese), grilled beef tenderloin, or apple crisp with ginger ice cream.

Sweet caramel and toffee aroma, very powerful and inviting. Sweet caramel and toffee are also the main flavor introduction. Right behind those, some rum-soaked raisins and figs and cherries burst in your mouth creating a flavor explosion. The 8.7% alcohol is not shy in getting your attention early on, really adding some heat and depth to the beer.

In the middle, there is quite a large vanilla profile, very strong and noticeable. Some spicy and sharp flavors come next and pair with a low-grade alcohol burn. Those spices along with a hefty dose of hops tone down the initial sweetness quite a bit, to the point of where this beer is even a bit bitter.

Carbonation and body are both around medium. Tons of different flavors and interactions are all competing for attention. It's tough to really get a grasp on this beer. Enjoyable and some really nice flavors. I thought the vanilla flavors were a little much, however, and the alcohol was a little hot and raw and aggressive. Check it out and let me know what you think. Until next year... 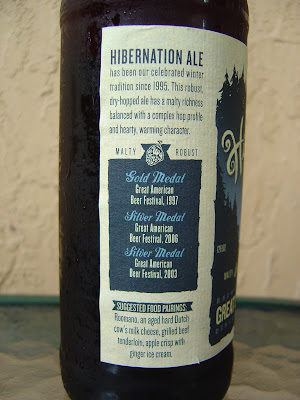 Agree with you, the ABV was very aggressive since the first sip!... but a very nice beer. Regards!