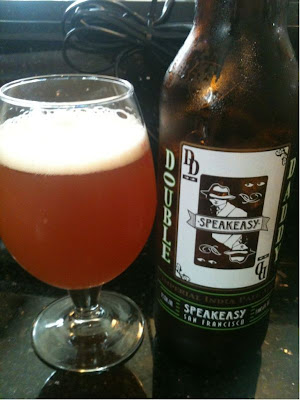 Check out this triumphant return of Beer Mogul Brewkkake. Lately he's been getting himself addicted to beer trading, though it appears this bottle was acquired on a trip north. Anyway, enjoy!

During my visit to Washington D.C. this past June I did a little bottle shopping and came across this gem from Speakeasy Ales & Lagers out of San Francisco, CA. I'd never heard of the beer or the brewery from where it came, but between the name and Prohibition-era motif of the label, I initially thought it was a beer from my hometown Chicago (and I'm a sucker for all things Chicago and/or 1920s-30s). I then noticed "San Francisco" printed on the bottom of the bottle and with a name like Double Daddy, one could foolishly wonder if this beer was printed to promote gay adoption (or, at the very least, pay homage to the 80s sitcom "My Two Dads").

Double Daddy is the imperial version of Speakeasy's Big Daddy IPA and clocks in at 9.5% ABV. I've had this 22 oz. bottle unintentionally "cellared" since early June and with no bottling/expiration date shown, I figured it was now or never. For all I knew, it could have sat on that store shelf for months before I bought it. I popped the cap and the bottle released a hiss equal to that of my sigh of relief - carbonation was at least the first good sign. I poured it into my New Belgium globe glass and it settled into a cloudy amber/copper that also had an attractive glow to it. A finger-thick eggshell white head formed and didn't dissipate quickly.

The aroma was the next encouraging aspect of this beer - a pleasant swirl of citrus, pine, and malty caramel sweetness. Taking the first few sips miraculously matched the aromas. I don't know what Speakeasy's recipe is but they must have used water from the Fountain of Youth. Double Daddy tasted extremely fresh, with an excellent bite of hops perfectly balanced with maltiness that immediately reminded me of that "raw sugar" you can find in brown packets at most coffee shops. The hops jumped from piney to peppery to citrusy, and played on an endless loop atop a layer of earthiness that added a certain humility to the bold flavors. The lip-smacking malt balances it all out and everything leads to a slightly dry finish that instantly preps you for the next sip. And the next sip, and so on.

I was blown away by how fresh this imperial IPA was after all these months. There was nothing about this beer that would suggest it was, at the very least, a half year old. What isn't a surprise after tasting it is that Speakeasy's official website is actually www.goodbeer.com. If Double Daddy tastes this fresh after all these months, I can't wait to try it when it's REALLY fresh. I think Speakeasy just dethroned Rice-A-Roni as the "San Francisco Treat".
Posted by Beer Drinker Rob at 8:30 AM