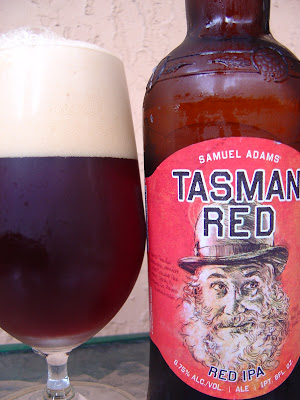 Today I'm drinking Tasman Red, a Red IPA brewed by The Boston Beer Company in Boston, Cincinnati or Breinigsville, Pennsylvania. The illustration on the front of the label depicts a Santa-Claus type guy that broke into a 1960's Crimson Tide locker room and stole Bear Bryant's hat. The back label calls this a "wily red IPA" which I guess is a play on their character's disheveled beard and appearance. Blah, blah, Tasmanian hops, blah, blah, bold flavor, blah, blah. This is Batch No. 1 of this experimental beer.

Big 22 is branded similarly to their other beers in this series, for example The Vixen. Bravo for an upgrade from their tortuous corporate look that was starting to aggravate me. The malts and hops are also listed in like 2 pt. crazy-man scribble font, barely readable without a microscope. Anyway...

Caramel aroma with some citrus and orange and pine. Caramel and toffee sweetness right at the beginning lasts a second or so before more bitter flavors attack them. Lemon rind and pine aggressively balance and swing the pendulum toward bitter shortly afterward. That bitterness grows and grows more intense with each sip. 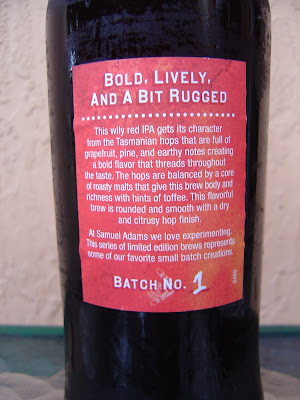 But then you start to taste more caramel and candied sugar sweetness. I was a little confused (not really, remember this is just chatter) until more grapefruit and lemon bitterness clobber that sweetness. Back and forth, tug of war, but the sweet demonstrators ended up in the mud pit in the middle.

Herbal, earthy, hoppy. Oh, and by the end of the bottle, you will definitely be feeling continuous spicy black peppery nips at your palate. Reminds me of a rye spiciness. The 6.75% alcohol warms a little and the finish is dry. Enjoyable, flavorful, complex and another winner by Sam. Great (relatively speaking, for those of you that don't mind being ripped off by bomber prices) price too!

Oh, one more comment. If you give two shits about "lacing" on your glass, well, this is definitely the beer for you! It was achieved perfectly. Grab this beer and let me know your thoughts.