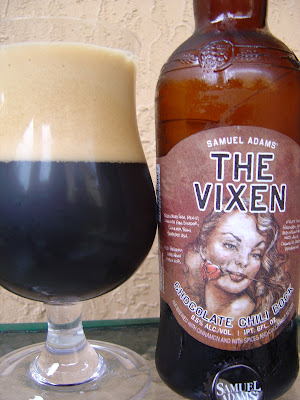 Tonight I'm drinking The Vixen Chocolate Chili Bock brewed by The Boston Beer Company in Boston, Cincinnati or Breinigsville, Pennsylvania. A handful of bloggers and commenters have dissed this beer a little for lacking spiciness, which is certainly promised on the label. We'll see. I'm still excited.

The bottle shape and label on Big 22 are really different from the corporate line Sam Adams usually puts out. And that is an awesome thing! First, the illustration of the seductive woman with a rose in her teeth must be who the beer is named for. Her eyebrows are TO KILL FOR. LOL.

This beer is brewed with chilies from Mexico, cocoa nibs from Ecuador and cinnamon from Southeast Asia. The hops and malts are also listed on the front. The back label is titled "DARK, RICH, & ENTICING WITH A SPICY KICK". A story about what to expect follows, which you can read below. This is Batch No. 1 of this beer, which is part of a series of favorite "small batch" brews they have done. And by "small batch", they mean larger batches than many Indie Breweries brew all year.

Nice head. Rich milky sweet chocolate is the dominant aroma, but a vigorous swirl will show you some of the cinnamon. Chilies in the aroma? Not unless I tap my ruby slippers together three times. 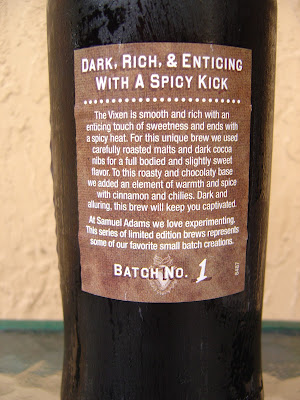 Rich, chocolaty cocoa power flavors come through first, sweet but not too sweet. A solid roasty bitterness balances the initial sweetness almost to neutral. The Vixen has a creamy smooth texture that feels really nice in the mouth. Cinnamon flavors do appear and add an interesting hard candy-like flavor, at least initially in Big 22. And in the beginning of the bottle, I thought that the chili spiciness was fairly muted to only a light heat in the throat.

Now, I'm almost done with this bottle. It's taken me longer to drink this than most 22s. Not sure why. What I do know is that as you progress through your experience, the cinnamon starts to be lost in an ever increasing amount of chili spice and heat. It's like the cinnamon and chilies reversed roles. I don't know what spice immunity Lost and the rest of these guys have, but there is definitely some spicy chili heat to this beer. Not like the Left Hand's Pepper Porter which I recently had, but a significant and (what I think) just right amount!

One other thing I started to notice as I sipped and sipped and sipped--there is an underlying graininess to the entire beer that once you realize it, you totally taste it. Hard to explain. Anyway... you will finish dry with a pleasant cocoa aftertaste and residual heat. I liked it and definitely recommend it. Sweet but not by too much. Very enjoyable. I think this beer was $5 so go ahead and grab it, even as a bomber. You have my permission.

Posted by Beer Drinker Rob at 8:26 AM

Oh maybe you were hypnotized by her brows and that's why it took you longer to drink it??

The description sounds really cool. I imagine little elves mixing and matching the ingredients in the search for the perfect beer. Maybe it's because I'm in a Christmas mood though...I don't know. I do know what you mean when you suddenly taste a hidden flavor and suddenly it's the only thing you can taste when you eat/drink something.

Your birthday is almost here!! :D

Yeah, those brows are hypnotic. She must have spent years crafting them. You know she reminds me a little of your illustrations.

I like your "little elves" story. Takes some imagination to cboose the ingredients in some beers.

Ah yes, I think the softness in the illustration is like my work :) Don't know how else to describe it haha.