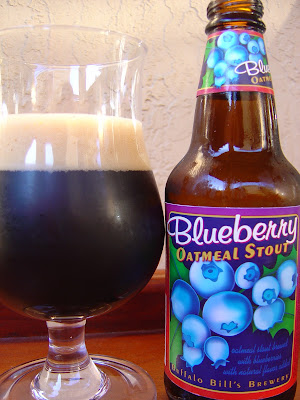 Today I'm drinking Buffalo Bill's Blueberry Oatmeal Stout brewed by Independent  Brewers United Corporation in Seattle, Portland or Berkeley, California for Buffalo Bill's Brewery in Hayward, California. The label depicts some really blue and fake plastic-looking blueberries, not very realistic. The label around the neck says, "It's What's for Breakfast" which is funny to me because I said that about a different beer a week or so ago. Oh well. I guess there can be more than one breakfast beer!

Nice sweet cocoa aroma, and although I can smell some blueberries, it ain't easy being blue. Now, the blueberry flavors are a much more prominent component than the aroma let on, happily. There is also a large dose of cocoa that jumps out in the beginning. Creamy and fluffy texture, nice bubbles. The blueberries aren't sweet and instead add a refreshing tartness to the beer. A light bitterness prevails even as the chocolate flavors provide more sweet balance.

Now I don't know what you think about this, but I taste cake in this beer, plain yellow cake, just as an interesting after-effect. This beer has two contrasting yet complementary flavors, chocolate and blueberry. A simple beer but with enjoyable flavors. The 7.5% alcohol added some warmth, especially at that end. I was frankly shocked it was that high when I saw it on the label after consuming the entire bottle. C'est la vie! Drink up. Nice beer.

Posted by Beer Drinker Rob at 8:19 AM