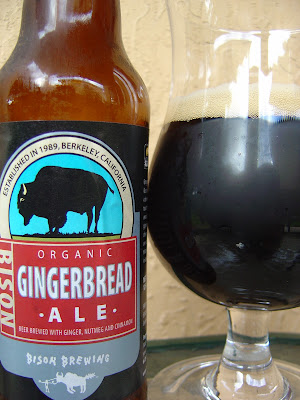 Today I'm drinking Gingerbread Ale, an organic spiced holiday porter brewed by Bison Brewing in Ukiah, California. I enjoyed this one last year around the same time, but wasn't going to grab it again this year until I eavesdropped Owner and Brewer Daniel Del Grande mentioning that he had changed up the spices a little this year. Good thing Daniel doesn't tweet too much as I just sifted through a month of conversation to find it. So glad it wasn't my imagination. Whew!

I also dug up another interesting tidbit about the beer, which is unbelievable (see below). Oh, and who doesn't want to meet and party with The Beer Wench, who works for Daniel? Yes, that's rhetorical. 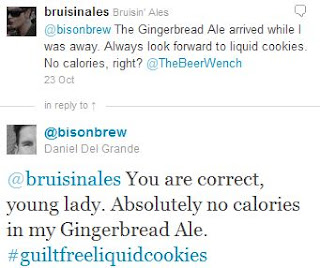 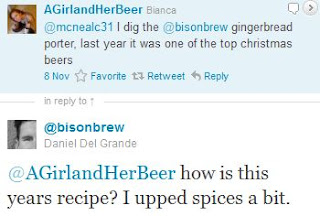 Hot cocoa and gingerbread aroma, very pleasant. Whoever named the beer is a genius! Cocoa flavors to start as well, but now you taste more of a roasty smoky flavor with it. Nicely spiced with cinnamon and nutmeg, not overdone and totally adds a nice supporting touch. Some burnt sugar flavors are also present. A few moments after your first sip, you will start to detect some hoppy bitterness that balances the initial sweetness very well. By the end of the bottle, I feel it was just a little much bitterness, perhaps because an aggressive carbonation really makes it stand out on the rough side. Body was a little thin, but overall this was a very nice beer, flavorful and enjoyable. Nice job Bison Brewing! Merry Christmas. 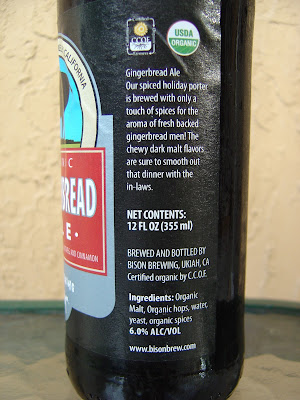 I didn't have last years version, but I did like this one.

I liked them both. Not sure I can remember last year well enough to compare, but the spices didn't overwhelm this year (despite being increased) which is the biggest problem with holiday beers.