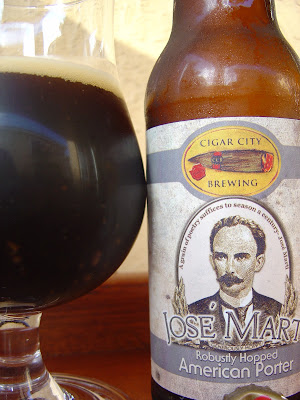 Today I'm drinking José Martí American Porter brewed by Cigar City Brewing in Tampa, Florida. The label depicts Jose Marti, who was a writer and national hero in Cuba in the late 1800's, actually dying in a battle against Spanish troops in 1895.

The brewery went out of its way to say the beer is both "Generously Hoppy" and "Robustly Hopped", both phrases one on top of the other. So I'm guessing they are saying the beer is hoppy. There is a quote from Jose, "A grain of poetry suffices to season a century." And another passage from an 1894 poem titled A Morir (read below). Also stamped onto the label is NOV 2011 TWOTWO. Not sure what the second part of that means.

Rich roasted malty aroma and yeah, quite hoppy too. Some coffee and smoke and licorice accent a complex aroma. The flavors match the aroma almost to perfection. Roasted malts, coffee and light chocolate flavors are the initial flavors. And the beer is quite hoppy, lemony, at the same time. Very unique. Bitter but not accompanied by that hated roasty harshness many porters offer.

Smokey, licorice, citrus--all there. Some warmth from the 8% alcohol comes through toward the end. Good body. The feeling in the mouth is a little rough, moreso when swallowing. Finish is dry. Nice flavorful beer, complex and enjoyable.

One more comment. It's pretty awesome to get a history lesson with a brew, don't you think? I take these lessons, especially the ones about Cuban and Latino culture, with me to my Cuban neighbors' parties. Then I wow them over really poor domino play! 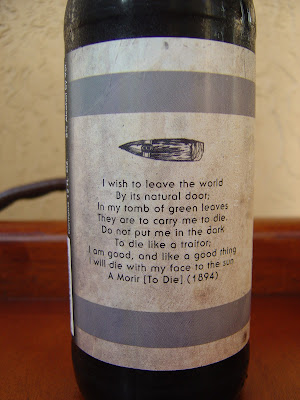 Posted by Beer Drinker Rob at 8:20 AM

I am always looking for this beer, Jose Marti , from the Cigar City of Tampa, here in Miami, and I cant find them.