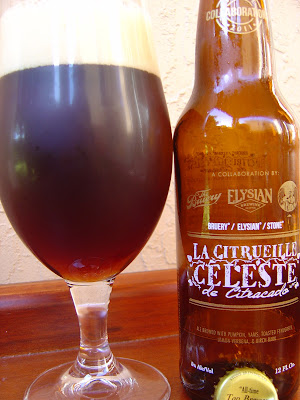 Today I'm drinking La Citrueille Celeste de Citracado, a collaboration beer between The Bruery, Elysian Brewing and Stone Brewing, ultimately brewed by Stone Brewing Company in Escondido, California. After I finished Jury Duty in Ft. Lauderdale yesterday, I stopped by the conveniently located Total Wine to snoop around. As I picked up this bottle, a dude that I think worked for the distributor told me it's a fantastic beer and really different and that what's on the shelf is the end of them, so around 10 or so.

I've had a few other of the Stone Collaborations in the 2011 Series, including Japanese Green Tea IPA and Cherry Chocolate Stout, but this one had until now escaped me. For only a 12-ounce bottle, there sure is a hell of a lot of type on the label. First, this is an ale brewed with pumpkin, yams, toasted fenugreek, lemon verbena, and birch bark. Typical shopping list in San Diego, I guess. (Yeah, I looked up the ones you didn't know what they were either.) On the side: "Drink Fresh. Do Not Age." On the neck: "Collaboration: A celebration of the community and culture of craft brewing." And of course, the cap, a quote from Beer Advocate referring to Stone: "All-time Top Brewery on Planet Earth."

Finally, the back label translates the beer name to The Heavenly Pumpkin of Citracado, tells a little story, and offers nine "random thoughts" from Stone Brewmaster Mitch Steele, dated September, 2011. The points mostly offer thanks to everyone involved. Perhaps you can read the photo below, blown up of course. So far, I'm pretty worn out from this review. Let's go. 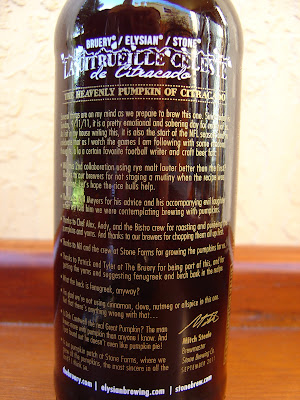 Pumpkin aroma with molasses. Swirl that glass around and you'll get a big whiff of birch beer soda. Lots of birch beer flavors in the beginning too. In addition to the birch, a hefty dose of gourd flavors is front and center, though those flavors are very bland. There is a spicy middle, and I'd have guessed nutmeg if the brewer didn't say it wasn't part of the massive recipe. So I'm going to say the spicy part is some fenugreek, right or wrong.

Brown sugar, coffee, and earthy herbal flavors meet lemony, citrus bitter and astringent flavors in the second act of this beer. Not really a balancing match, though. Rather, every ingredient fights for starring role in a rather unpleasant way. Your 5% alcohol wasn't one of the noticeable ones. This is a freakin' weird beer! There! I said it! A laundry list of incompatible flavors attacks every sense you have, including common sense. Not sure if assuming they did a test batch is wise, but if they did (and especially if they didn't), it was super ballsy to ever release this collaboration. The herbal aftertastes reminds you of all the flavors you just tasted. Strange. Didn't like it very much.

Posted by Beer Drinker Rob at 8:22 AM