Olde School Emerges From The Tomb 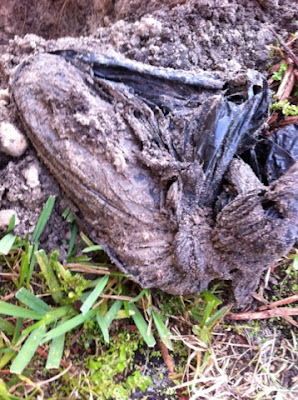 Today is one year later, dig up day! I was pretty careful digging for the bottle considering it was only protected by some dirt and plastic bags. That and I lost the map with the exact coordinates. I found the bag without incident and was pretty close with my memory of location. Let me tell you something--those bags were totally damaged from a year of living in my back yard. How many years until a bag decomposes? Two?

Before starting to dig, I needed to decide what to bury in the hole in place of the beer that I was retrieving. You see, before I even knew that Dogfish sent new bottles of Olde School down here this year, there were already zero bottles remaining in all South Florida stores. Seems right for probably the most diligent and loyal customer of one particular retailer, don't you think? Anyway, this year I decided to bury a trio of Brooklyn Black Chocolate Stouts, with a box around them to add a little more protection, along with a few bags again.

No sooner did I dig the hole, get a little dirt on my hands and try to take a few photos than my stupid 2002 Sony CyberShot DSC-P10 started giving me some stupid Lithium battery errors. Fuck. So I went inside, washed my hands and grabbed my iPhone. Let's see how these photos turn out. 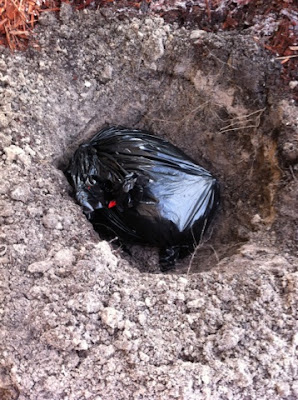 Anyway, you guys gotta remind me again next December 17 to dig up those new beers. A few of you were awesome this year. I put away the shovel and cleaned up again and dragged that decayed bag out front to sit down and uncover last year's jewel.

It wasn't easy to rip through all the plastic and get the bottle out, but when I did, it was very moist inside. The bottle and label were wet and the cap had a bit of rust on it. As you know, it rains a lot in Florida. I'm not sure I was surprised by the fact that water ended up penetrating my 4-5 layers of plastic barriers, but I was a little pissed. Anyway, Mother Nature, we'll see soon if you damaged my precious beer! (Bitch!)

Update: Here is the drinking part of the review. Not sure which order you read these posts.