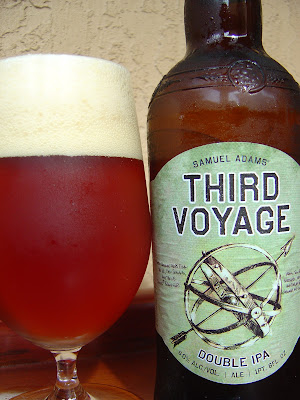 Considering I got home from the casino at 1:30 am this morning from a hard night at the Blackjack table, it's remarkable that I'm up, already got my hair cut, and am now back home doing a beer review before noon. If you guys ever need lessons on how to lose $100 in less than 10 minutes, I'm your guy. But though I was in dire straits with my second $100, I climbed out of the abyss and had a roller coaster night taking me to $360 and finally landing back down at my original $200. "Stupid $50 last bet. She was supposed to bust!" By the way, if you ever hear anyone say that, give them the 1-888-Admit It number. It's a gambler's quote.

Today I'm drinking Samuel Adams Third Voyage, a Double IPA brewed by The Boston Beer Company in Boston, Cincinnati or Breinigsville, Pennsylvania. This is the 4th of 4 I've had from their new experimental, small-batch series. This one tells a story of Captain James Cook's 3rd voyage and how it inspired the name and the beer. The front of the label on Big 22 seems to depict some old navigational tool one might find on a ship of that era. The bottle says I can age the beer though that's usually a no-no for a DIPA that is "Bright and Intense [and provides a] Vivid Hop Punch". Up to you.

Giant fluffy head--I lost a little over the edge in my enthusiasm. Nice aroma. Caramel and pine and grapefruit and sweet orange, good malty and hoppy contrasts.  Pine and grapefruit bitterness are sharp in the beginning. I wasn't quite expecting that, but I'm definitely awake now. That initial bitterness is reeled in by some sweeter malty caramel and fruity orange sweetness.

Some spirits-like palate cleansing by the 8.0% alcohol comes next, like from a clean vodka. That alcohol experience is coupled with a bitter lemony medicinal theme that kept repeating itself throughout the entire bottle. You finish dry. Carbonation and body are fine. There are some nice flavors but I couldn't get past that one particular reoccurring flaw. A little warmth perhaps made it better but not by much. I wouldn't recommend this beer will never drink it again. The winner of the four new brews from this series is clearly The Vixen Chocolate Chili Bock. Hands down. 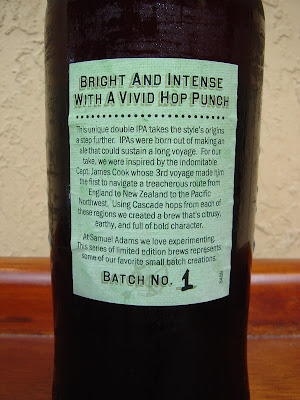 Posted by Beer Drinker Rob at 8:33 AM