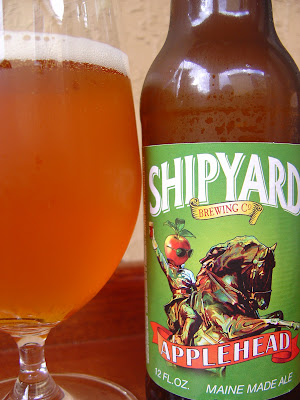 Today I'm drinking Applehead, a beer "hand brewed and bottled" by Shipyard Brewing Company in Portland, Maine. I'd love to see their definition of "hand brewed" and to know if "hand" also modifies the word bottled. The label depicts what would otherwise be a headless horseman on his stallion, but of course this guy has an Apple Head. I'm no apple expert, but it appears to be a Macintosh Apple Head, with shades on too.

This beer is of course Shipyard's attempt to cash in on its wildly popular Pumpkinhead beer. I hope this one tastes good, because for me, Pumpkinhead tastes like shit in a category that already sucks in general. Best enjoyed before June, 2012.

Juicy apples, malty aroma, not particularly strong. Similar flavors, with the juicy apple sweetness showing up first. Some cinnamon accents a very malty base. A little chewy with a decent body but not overly thick. Some hops also do a decent job of keeping the sweetness in order and balanced. Refreshing, lightly sweet, good carbonation. Simple, easy drinker. The 4.5% alcohol was not noticeable.

Well, this was a zillion times better than Pumpkinhead. I was thinking this beer may try to go a little more in a cider direction, but nope, it didn't even go near there. Rather, it stayed more closely to baking apple flavors and spices. Give it to someone who says they don't like beer. This post is dedicated to "Social Media Vixen" Leah, mainly because she said something nice about me yesterday and she likes beer.

Posted by Beer Drinker Rob at 9:39 AM

I skipped this one on my last visit to the beer store. I thought Pumpkinhead was okay but I was worried it would be too ciderlike.

Hey Mike. Not cider-like at all. It's like drinking apple cinnamon baked goods, nicely sweet.