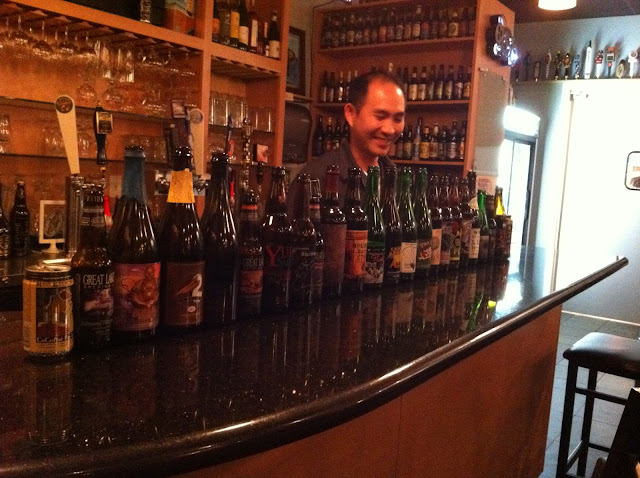 Every Monday night, a bunch of beer geeks descends on Coffee District in Delray Beach, FL for bottle share night. Though I had been to Coffee District once before, I never managed to make it for this weekly gathering. My car told me after finally attending a few days ago that my infrequent showings are because of the 100 mile round trip on a Monday night, not to mention the need to drink in total moderation while being stared down by 20-30 big bottles of superstar beers!

But I thought what the heck. I didn't need to work that day and soon Little League would be starting and I'd have almost all evenings booked. So I grabbed four bottles of Great Lakes beers I had remaining from my friend's generous gift a few months back. Great brewery, I had already tried a bottle of each of them, and it was the only out-of-market beer I had available (that's a general requirement of what to bring).

When I arrived (on time, of course), I plopped right down next to Brewkkake. It was like we had just chatted earlier in the day. Well, actually we did, via Twitter. I actually met him at Coffee District on my first trip there, almost two years ago. I met a bunch of the other gang members, too, each as they arrived. I also met Melinda, who was working there that evening. Oh, and never forget Chung, front and center and always a welcoming host. 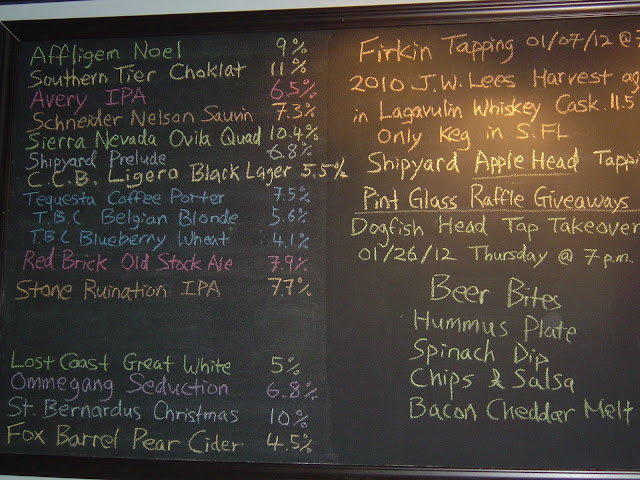 Before we kicked off the bottle share, I decided to order a beer from the board. Since I've never had any Tequesta Brewing beers, I asked the group which of the three on tap was the best. Melinda told me the Belgian Blonde, so I ordered the Belgian Blonde. It's the only beer I didn't take a picture of the entire night. Oh well! The Belgian yeast was very noticeable. Tart lemon and citrus, simple and quite refreshing. I wrote that the yeast was prominent again, LOL, first drink, so I guess that caught my attention.

1. De Ranke Père Noël was the first bottle we tasted from. This was another very yeasty beer. A bit of funky bitterness and lemon rinds seem to take the center stage, but sour apples, spiciness and a dirty, earthy consistency also show up. Plenty of floaties also were present in this beer. Pretty decent start.

2. Next up was Arbor Brewing Company's Sodibo Sour Series Barrel Aged Blonde Ale. I'll tell you what. It was almost gone before I knew it was even opened! I may have kicked the bottle with my quarter ounce pour, LOL. Sour. Very tart, pleasant apple fruitiness complements that acidic bite. Nice!

3. Backlash Beer Convergence Super Saison, which Brewkkake said he received in a trade. Lots of fruit. Pears, bananas. Definitely funky too, with lots of wet dog flavors in this beer. This beer was cool because there was this persistent sweet aspect, yet it was sour concurrently, perhaps like a lemon drop. Dry. Good carbonation.

I did overhear a comment about the label being all tough with brass knuckles while a delicate saison resided in the bottle. That's a pretty funny analysis! I guess there are definitely manlier, more ninja-type beer styles! LOL.

4. De Molen Bat Out Of Hell Russian Imperial Stout was up next. This was their collaboration with Flying Dog, and the label proudly touts that only 666 bottles were filled. Terrific aroma, rich raisin and chocolate. Prune and raisin flavors start but an amazing amount of sweet toffee and hints of vanilla add a lot of interest. The alcohol is very noticeable yet incorporated enough to work. Bourbon, oak, yep! Very smooth. Definitely a favorite of the night, though I'm not sure it was the winner on what eventually became Saison Night! You'll see.

5. Dogfish Head Ta Henket is actually available in our market. In fact, I think I heard Melinda say that Coffee District has a full keg of the beer. This is the latest "Ancient Ale" from the brewery. I had not tasted the beer or heard anything about it before my pour. I did see it on the Total Wine shelf, but decided a $12 to $13 unknown bomber was double the limit I willing to consider.

The smell was really fucking weird. I thought about that banned Asian fruit, whatever it's called. But one guy said it smelled like meat loaf and another said wet dog food. I'll protect those guys. The flavors were better, with apples, pears and chamomile. VERY flowery, petals, perfume. But more of that weird fruit made me dump the rest. Glad I passed on buying for myself--I used that savings to procure 1/3 bottle of Macallan 12 Year Single Malt Scotch on Sherry. See where I am going with this?

6. HaandBryggeriet Norwegian Wood Smoked Ale. Sorry about one of my shittier pictures of the night. We couldn't figure out the name of this beer. I mean, Norwegian Wood? WTF? Powerful Juniper aroma. Smokey and malty and a little uncomfortably weird. Brewkkake pointed out that this bottle was brewed in August, 2007 with a Best Before August, 2009 date. LOL. The local food bank would not have even touched that, 2.5 years overdue.

7. Odell Bourbon Barrel Stout was dished out next. Actually, about this time, me, Mike and Brewkkake needed to aggressively attack the table where most of the attendees started to congregate, just to get a sample of each beer. What started out as a very slow tasting rapidly got out of control with bottle after bottle being opened and no real effort to share going around. Once we caught on, though, we were in the mix. Though everything went down a little fast in the middle.

I learned that in bottle share etiquette, everyone opens his or her own beer to pass around. Seems everyone had a simultaneous urge from this group. Anyway, this beer had a nice chocolate flavor and the bourbon from the barrel was only subtle, nice. Definite heat from the alcohol. Carbonation was tingly, spicy, some strange nuances, not bad.

8. Pelican Pub & Brewery Le Pelican Brun 2011. I wish I knew who brought some of these beers, but whatever. Spicy, sour apple, funky, caramel. That's all I wrote. The label is pretty cool.

9. Olde Hickory Christmas Ale had all sorts of herbs in the aroma. I wouldn't be surprised if Herbes de Provence were used in the brewing process. Herbal flavors, flowers, flower petals between the gums. Some faint spiciness along with a sweeter honey contribute as well. Someone said fruitcake with a little hops, and I concur! 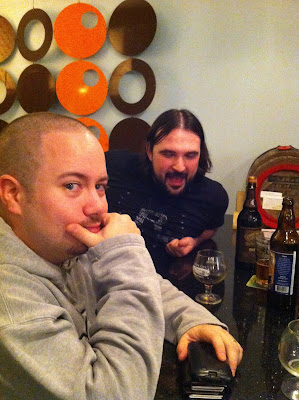 10. Maui CoCoNut PorTeR. Since there was only one 12 ounce can, and considering I had it before, I didn't drink any to allow for everyone else to check it out. I didn't even take a picture, but I did shoot one of Brewkkake and MikeLovesBeer toward the end of the evening.

What a great bunch of guys! We rapped about beer book publishing and our favorite authors. There is one in particular that we can't wait to read on our Kindles.

Brewkkake talked about a possible return to his insane beer blogging hilarity. He was a little tentative but when the whole Brewkkake Brand concept came up, I think he saw the potential of elevating to new heights!

11. Rockyard Brewing Buddha Nuvo Saison. So apparently this one is aged in Chardonnay barrels. It certainly has a floral and spirits quality to it. We were thinking gin. Perfumey with a nice sweetness. Not sure about the saison part.

This beer is sour and funky. At the same time, it has a rich molasses consistency and flavor that kicks ass. Apples, caramel, really nice.

13. Williamsburg Alewerks Café Royale. Well, the beer does have the word Cafe in it and they weren't lying. Tons of coffee flavors complemented by a rich milk chocolate. Smooth texture. A little thin but enjoyable.

14. Alpine Beer Duet IPA. I didn't know this was an IPA until I just looked online a few minutes ago. I guess I probably should have as it had many characteristic flavors. Great fruitiness, hoppy, citrus. The light bitterness was refreshing and crisp. A few of us had seconds and thirds of this beer. Very pleasant.

15. New Belgium Lips of Faith Prickly Passion Saison. I did find this beer to be refreshingly prickly. Nice fruity apple, not really passion fruit, good flavors though. Also not much of a saison funkiness to the beer. I liked it but can't say it was too memorable.

16. AleSmith YuleSmith Holiday Ale. I didn't really take too many notes for this one, just that it was spicy, weird and I didn't like it. How's that for in-depth analysis?

17-20. Around now is when Mike and Brewkkake told me I needed to open my own bottles. So I cracked open four bottles from Great Lakes Brewing. I didn't take pictures or taste them since there was only 12 ounces of each and I already reviewed each a month or so ago. If interested, here are reviews for the Holy Moses White Ale, Eliot Ness Amber Lager, Edmund Fitzgerald Porter, and Commodore Perry IPA.

21. Fantôme De Noel was the next beer I tasted. A prominent lemony bathroom cleanser flavor got my attention in the beginning. Acidic, earthy, vegetal. To be fair, I will say that the  beers were starting to run together by this point, but still, I didn't imagine the unpleasant features I've already mentioned.


22. Plaid Shirt Seth Rhubarb Saison Homebrew. When someone started passing an unlabeled wine bottle around, I knew it was home brew time. Seth brought in a bottle of his Rhubarb Saison to share. The beer had a nice and interesting fruitiness to it, refreshingly tart, definitely different. The flavors were quite enjoyable and I could have easily sat around all night drinking it. Great job!

23. Midnight Sun Bar Fly Smoked Imperial Stout. I had to nudge my way in to get a taste of this brew. Chocolaty flavors with an enjoyable amount of smoke kick things off. Coffee and vanilla intricacies are there too. Very smooth. Nice beer. I'd like to try this one again as the first beer of the night.

24. Cascade Apricot Ale. The label says this is a Northwest Style Sour Ale, 2010 Project, Aged in Oak Barrels. The apricot flavors are very noticeable and very nice. Deliciously sour. Mmm. The tartness is super refreshing. An awesome beer and one of my favorites of the night.

In summary, I had a great night and met a bunch of great new people. Hanging with Mike and Brewkkake is always fun as well. The other really cool thing was getting to try a bunch of beers I'd likely never get an opportunity otherwise. Many of the beers from this tasting have very few online reviews and are fairly scarce. If I had to name favorites or standouts, ones I'd like to repeat if possible,  I'd say that the Sodibo (#2), Bat Out Of Hell (#4), Bar Fly Smoked Imperial Stout (#23) and Apricot Ale (#24) are my choices.

Anyway, if you're in the area, check this event out! Take an out-of-market bottle, go meet some cool people, and have a great time. There is no secret handshake that gets you invited. Be sure to check out the brews that Chung has on tap at Coffee District too. He gets some of the rarest beers around the area, some spectacular options.
Posted by Beer Drinker Rob at 10:30 AM