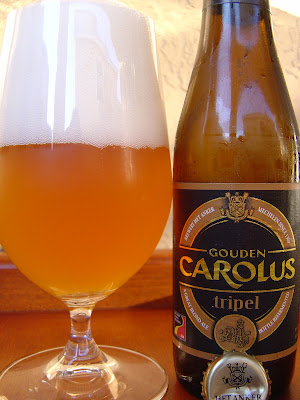 Today I'm drinking Gouden Carolus Tripel brewed by Brewery Het Anker in Mechelen, Belgium. There is a little story on the side which lets you know that this beer is named after the golden coins with Emperor Charles V on them. On the front they have no issues saying flat out, "A Great Blond Ale". 330 mL bottle. Very plain label.

Giant fluffy white head which took forever to recede. I'm not much of a lace kind of guy, but this beer has that down pat! Fruity sweet peach aroma, very yeasty with a touch of lemon as well. That lemon carries over into the flavors, offering a hoppy and light bitterness to the initial sips. Belgian yeast is also prominent and really makes some spicy clove and black pepper stand out.

Nice fruity pear and apple are next and round out a very enjoyable beer. Carbonation is high and prickly, refreshing. Light heat from the 9% alcohol shows at the end, but not too much. Flavorful, balanced. I liked it a lot.