Today I'm drinking Insanely Bad Elf, 2011 Vintage, an Imperial Red Ale brewed by Ridgeway Brewing in Oxfordshire, UK. This "Elf" series has dozens of beers in it that come out each year. Yes, I've had a few and yeah, they have been decent for the most part. But I've mostly been wary of them as average gimmicky beers. Most people buy these for their funny names. I mean, come on... Santa's Butt? (BTW, if you are a smoker and click that link, you may quit after seeing the poster picture). One negative this gimmick has against it is that when Christmas is over, the prices drop just because of the name. This one was recently $2 and the local rep convinced me it was worth a try.

On the front of the label is a crazy elf, straight jacket and all. He's reading an "Elf Regulations" book, holding it with his feet. The story on the side written by Brewer Peter Scholey lets you know that Santa had recently visited this particular elf to see how he was doing. Santa concluded that "perhaps sanity is over-rated!" This elf was having the time of his life in the asylum. This beer is made with barley and rye.

Caramel and spicy black pepper aroma, with plenty of booze and some light fruitiness. Rich sweet caramel and honey flavors coat the palate, very thick and luxurious. And the 11.2% alcohol wastes no time adding some booziness to the experience. It's actually the alcohol that keeps the initial sips from seeming sickly sweet. Very sugary, yet those flavors are matched very well with an apple and pear juiciness that is really quite nice. 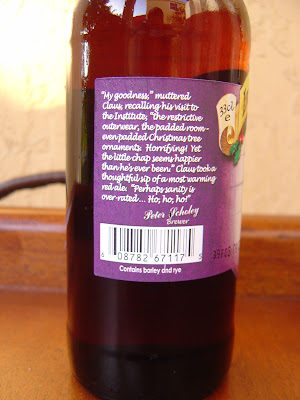 A spicy barleywine feel comes next, and the rye is definitely a contributor to that. The alcohol provides some heat and kick but never crosses the "shiver line'. This beer also has a brandy-type quality to it. Carbonation is low but OK. A little sweet overall, and 330mL was certainly enough, but a really solid beer. Great depth of flavors, complex, and very enjoyable. I'm going to see if my local Total Wine has any more of them they want to get rid of, and I suggest you do the same!