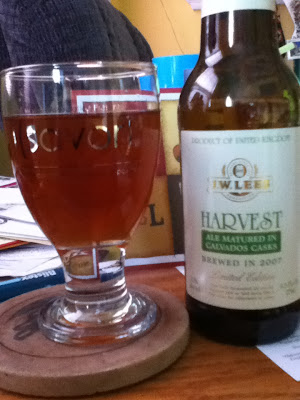 Well, Beer Geek Joey completed his triumvirate of guest posts covering J.W. Lees Harvest Ale 2007! He started with the regular version, moved on to the beer aged in Sherry Casks, and is finishing here with the version aged in Calvados Casks. How about telling him how awesome the series is!

Like the regular 2007 Harvest Ale, the version finished in calvados casks weighs in at 11.5% abv, and comes in a 275 ml brown glass bottle.

Pear and mango jump out at first, but are replaced by vinous alcohol, very light caramel, and light brown sugar.  Slight touch of molasses, bread crust, and vanilla.  Less depth and little raisin character, unlike the other 2 2007 versions. Some oxidation/age, but without the rich sherry notes of the regular.

Pours clear red-gold, again utterly devoid of head. Yeast cake stayed intact longer than the regular, just like the sherry cask. Fine particles loose in the very bottom, but easy to pour around until the very end of the bottle.

A bit disappointing in the mouth. Mostly sugary sweetness and some vinous alcohol. Not really much complexity - not a bad flavor, but mostly just sweet. Finish is rather bitter.

Again, just enough carbonation to help balance the sweetness. Very viscous, heavy and creamy. Finish is a touch astringent, with a bitterness that reminds me of treacle.

Less complex than either the regular or sherry aged. Think the calvados may have contributed to the sharpness, but still not much wood noticeable. OK, but both the other versions are significantly more complex and interesting.
Posted by Beer Drinker Rob at 1:30 PM

Throwing mine in the fridge. Unfortunately, out of the three, this is the one I have. Oh well, will give it a go.