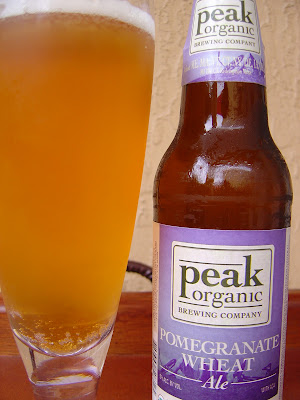 Today I'm drinking Peak Organic Pomegranate Wheat brewed by Peak Organic Brewing Company in Portland, Maine. This beer is brewed with pomegranate juice, açai juice and coriander. Examining the simple lavender label more closely, there is a nice photo blended into the purple colors. Two people appear to be laying in the grass relaxing and staring into the sky after a long and tiring bicycle ride, with their bicycles next to them. I wish this detail was a little more noticeable and the beer name lettering a little less dominant. Anyway, that's just me. Best enjoyed before January, 2012. Whew! Just made it!

So yeah, tons of wheat in the aroma. Tart pomegranate is there though it is dominated by the wheat. Overall, a pleasant aroma. Big wheat flavors follow. However, the pomegranate does put a better foot forward here, standing out a little more than the smell indicated. Juicy, tart and sweet all in one. Berry flavors are noticeable as well. I'm not sure if that's açai as I've never had it and have never been on that famous spammers' diet either.

Coriander flavors are more noticeable after half a dozen sips, as they seemingly build up toward the end. Refreshing despite the wheat texture and thickness. Juiciness works really well with the wheat. Pretty good and definitely an enjoyable beer.