Today I'm drinking Rodenbach Grand Cru brewed by Brewery Rodenbach in Roeselare, Belgium. The RosenbachUSA website named on the bottle went to some nonsense page in some confusing language, so I had to use Wiki to let me know that this is a Palm Breweries owned product now. Too bad they didn't have the foresight to hold onto that web property.

Now, a few weeks ago I was helping out the Total Wine staff, off the clock. There was a dude in the beer aisle that wanted to try a "sour beer" that his friend told him about, and he thought he might be on a mythical snipe hunt.  I was asked which to recommend. Even though I had never tried this Rodenbach beer, I knew the reputation. I also suggested Jolly Pumpkin La Roja to quench the guy's desire. He insisted on trying the one from Belgium because he wanted to see how it's supposed to be done. LOL. He kept asking if the beer is really sour. LOLz. Hope he loved it!

So ever since then, I've been thinking about this beer. Finally grabbed one yesterday. There is a story on the wine bottle that give you some details about the beer. First, it is a Flemish Red Brown Ale. This beer is a blend of young ale 33% and two year old matured ale 67%. Best before 7/3/14. 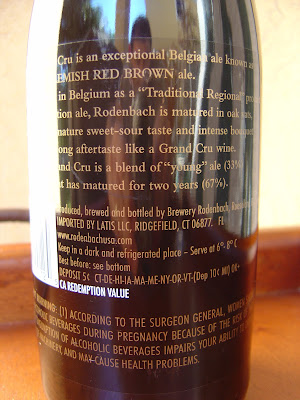 Vinegar, tart cherries and fruit, cider aroma--not too powerful but nice. Wow! Tart cherries explode on your taste buds right out of the gate. Then each sip finishes with a very deep and rich oak and vanilla flavor. Killer depth and really quite amazing flavors. Tangy berry sourness is quite spectacular. After a few sips, your palate will get used to the sourness, and I promise you'll stop making that lemon face.

About that time, you can start to enjoy the more subtle intricacies, like the wine-like spiciness and tannic, acidic grape flavors. At the same time, a sugary sweetness manages to survive against all odds and add an awesome relief. Carbonation is great yet the beer is terrifically smooth. Your 6% alcohol is really nowhere to be found, except that you do know this is an adult drink. Enjoyable! Terrific! I hope that dude agrees.

Posted by Beer Drinker Rob at 8:32 AM

I had this one on tap last month and loved it. I'm just getting started sampling sour beers, so I don't have a great frame of reference, but will drink this one again. Cheers!

This one is a fairly nice price and is a star of the class. If you ever get a chance at the Russian River suite, you'll have plenty to talk about. I'm no expert but I've liked the sours I have tried. I think that most are very good mainly because if you're a brewery that has the balls to brew one, you are confident in its success.