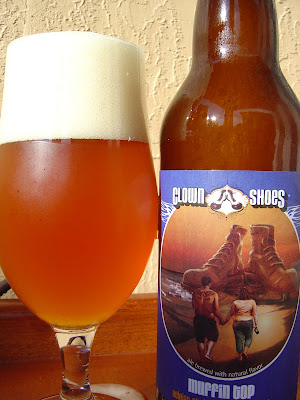 Today I'm drinking Clown Shoes Muffin Top, a Begian-style Tripel India Pale Ale brewed by Mercury Brewing Company in Ipswich, Massachusetts. When I bought this a week or so ago, I did so misreading it as a Tripel, so I was surprised today that this seemed to be some kind of Belgian IPA and Tripel hybrid. Cool. I'm game.

The label depicts a couple (definitely beer drinkers) walking hand-in-hand in the sand toward a secluded rocky alcove by the ocean. Only the rocks are actually two enormous clown shoes, heel to heel. The couple doesn't seem to think they are out of place, so neither do I. Also, the dude has a set of clown shoes with wings tattooed on his back, so it's no wonder he's good with the scenery.

Fluffy head. Peach, orange and tropical aroma, all with a large dose of Belgian candi sugar. Sweet candi sugar and Belgian yeast in the beginning. Those initial flavors play very nicely with orange and other tropical fruits, still sweet. 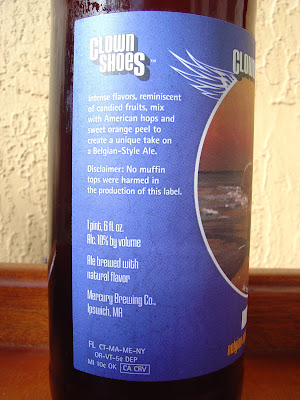 However, a distinct and contrasting hoppy kerpow comes next. Citrus rind, spicy and piney, really rescues the beer from that initial overt sweetness. Also, make no mistake that the 10% alcohol is a big player in this beer. It offers plenty of heat and some burn in the chest, while also cutting into the syrupy body that was developing in the beginning. Boozy, but "good boozy".

Powerful and intense black pepper flavors take over  for much of the experience, not letting up until long after the beer is gone. The lingering peppery bitterness and alcohol heat in the chest are also notable. The high level of carbonation really works in harmony with the hops and alcohol to attack the palate. Over all, a very nice deviation from a few styles. Good flavors. Enjoyable. Honestly, I'm a little buzzed after polishing off this 22 ouncer.

Posted by Beer Drinker Rob at 8:25 AM

Sounds like a good brew. I'm not a fan of too sweet, so it's nice to know it seems balanced by the heat and the spice. I'll give it a go!

yeah, Matt. pretty decent beer. check it out when you can.