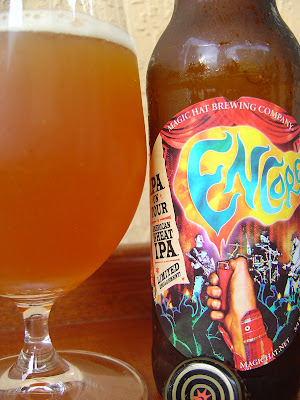 Today I'm drinking Encore, a wheat IPA brewed by Magic Hat Brewing Company in South Burlington, Vermont. This beer is part of their "Tour of I.P.A.s" I recently tasted Demo and Blind Faith from this series as well. The label art again focuses around the music genre. The focal point of the label is a guy's hand, held up flicking his lighter. The flame is like a speech bubble, stating ENCORE. Behind the main character's arm are dozens of concert goers doing the same with their lighters. They clearly want the rock band on stage to sing one more song!

The beer has a few floaties. Orange and tangerine citrus hops aroma with just a touch of caramel sweetness. The caramel sweet flavors also lead an introduction on the palate but are quickly washed away by some pine and grapefruit rind bitterness. Lemon, citrus, lightly medicinal. There is some wheat texture but I'm not really tasting it that much, but whatever. Good carbonation adds some refreshment.

The bitterness definitely wins, but there is still some decent balance. Toward the end of the bottle, the lingering aftertaste starts to feel a bit medicinal and sharp with the lemon. The 6.4% alcohol also adds to that medicinal feel a little bit. Not a bad beer but the building aftertaste is the worst part. And the most memorable.