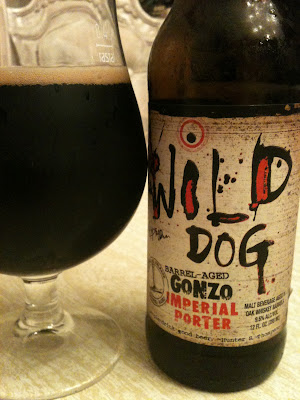 Guess who came back to do another guest review? Yep, Brewkkake! I couldn't believe it either--I am honored. Take a few minutes to enjoy and then let him know what you think.

The name Gonzo always amused me because it ought to remind you of one of two things - either a hook-nosed blue Muppet, or, if you're like me, a genre of pornography filmed to make it appear as if the viewer is a participant.  But this isn't just Gonzo - it's Wild Dog, Flying Dog's whiskey barrel-aged version of their always enjoyable Gonzo Imperial Porter.  Ralph Steadman's artwork once again graces the Flying Dog label, though this may be the first one I can recall that has no actual dog on it.  The side of the label continues Flying Dog's habit of quoting Hunter S. Thompson: "When the going gets weird, the weird turn pro".  I thought Billy Ocean said that?

The label continues, "Aged and seasoned for three months in wooden whiskey barrels".  As opposed to what, whiskey barrels made from endangered panda hide?  But unlike people, what really matters is what's inside.  It pours like a cola; dark, glossy brown with a hint of burnt sienna. A thin mocha head lasts about as long as a stick of butter at Paula Deen's house, and leaves behind a ring around the glass with minimal lacing.

The aroma can only be described as sweet, boozy goodness. The whiskey and a little of the wood really come through at the forefront.  Some milk chocolate and toffee step forward once the alcohol is done burning crop circles in my nostril hairs. 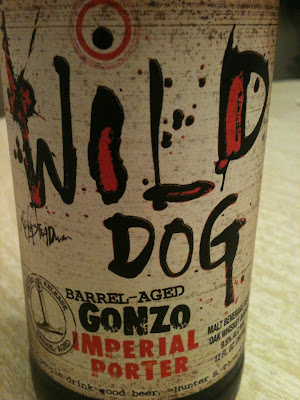 Upon sipping it, a 50/50 blend of whiskey and coffee is the first flavor to hit, followed by brown sugar and molasses on the mid-palate.  The whiskey/coffee combo punch hold their ground almost through to the end, where a somewhat watery finish showcases a little more roasted coffee bitterness and peppery bite of hops. As for the mouthfeel, it's lighter than I expected for a barrel-aged porter, and dare I say lighter than even its own base beer, Gonzo.  It doesn't really coat the mouth in any noticeable way and the watery finish is a downer.  The carbonation seems low but with the unexpectedly thin body it actually seems fizzier than it really is.  Welcome to America, where we've grown not to expect thin bodies.

I picked this up in one of my first big trades a few months ago after remembering how much I enjoyed it at Churchkey in DC, though if I recall correctly, the one I had there was on cask.  Gonzo is one of my favorite porters and the barrel-aged version is an improvement flavor-wise, but the body could use a bit more structure.  Still, if you see this at a bar, a friendly bottle share or on the shelf of your favorite beer store, you'd be remiss not to try it.
Posted by Beer Drinker Rob at 9:17 AM