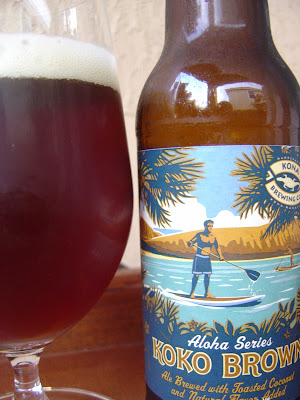 Today I'm drinking Koko Brown brewed by Kona Brewery in Portsmouth, NH for Kona Brewery in Kona, Hawaii. This beer is part of their Aloha Series and depicts some local Hawaiians paddling around on boards with the island volcanoes in the background. Definitely going for tropical. Under the cap you find the word Hulô, translated to Hooray. Bottled Jan 09, 2012.

Distinct aroma, definitely plenty of coconut but I'm glad they told me that's what it was. The smell is a little strange, quite honestly. Thank God the flavors have none of that strangeness, though. Very malty flavors, nice sweetness, with cocoa and coconut most prominent. A little oily, plenty nutty, and a light roast. The creamy texture is fantastic as well.

Some hops come mid-sip to help balance the beer from its initial overt sweetness. Easy to drink. Simple and flavorful. A winner that I'd say grab a sixer and surprise your friends at that party your attending next week. That being said, I didn't "feel like [I was] on a warm, sun-drenched beach in Hawaii". But for what it's worth, I didn't feel like I was in Portsmouth in February either!

BTW, speaking of Koko, did anyone catch the Roast of Flavor Flav last night? Yeah it was a rerun but Koko T was mentioned and her boobs were definitely noticeable. And then, OMG, I saw they have a TV show premiering in a few weeks. Ice Loves Coco. Un-freakin'-believable what will pass for TV!

Posted by Beer Drinker Rob at 9:11 AM