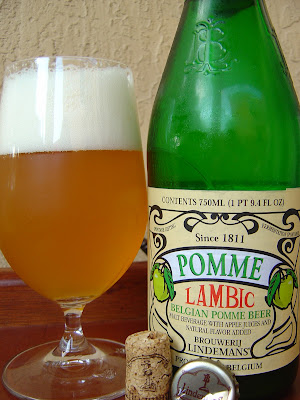 Today I'm drinking Lindemans Pomme Lambic brewed by Brouwerij Lindemans in Belgium. This is the apple version of a series that Lindemans brews, with their Kriek (cherry) being the most recognizable, at least for me. That's probably because when Michael Jackson served me a glass of it at the Cornell Hotel School in the Spring of 1993, I was utterly shocked at what beer could be. You know what? That may have been my Indie Beer Epiphany! Revealed today! I of course went home and drank some Piels and Golden Anniversary, but a seed was planted.

So this wine bottle was capped and corked. The cork wasn't in that great of shape but I did manage to carefully remove it without little bits breaking into the beer. There is a little story that you can read about how they brew this beer. OK. I gotta shut up since the recommended serving temperature is 38-41° F.

Tart apple and yeasty aroma, a little sharp and funky too. Granny Smith Apple flavors are big in the beginning, tart yet sweet at the same time. The acidic, cider-like flavor is soothed by a wonderfully smooth honey. Great contrast. I know it's been said before in other places, but the flavors are identical to Sour Apple Jolly Ranchers, sweet and tart but not really sour. I've eaten my share. 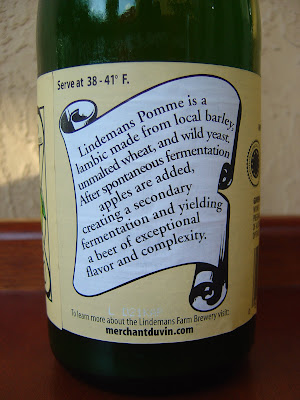 Carbonation is big and makes the palate dance, leading to a dry finish. The alcohol is pretty low, I think, and not really noticeable. None of that funky yeast aroma translates at all into the flavor profile. And for me, that was awesome because that aspect of the aroma was the least favorable part of this beer. I totally recommend this beer. Quite a delicious morsel.

Posted by Beer Drinker Rob at 8:35 AM

It sounds delicious. I'll put this on my "to drink" list.