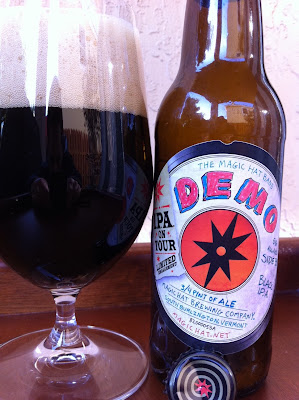 Today I'm drinking The Magic Hat Band Demo brewed by Magic Hat Brewing Company in South Burlington, Vermont. This beer is part of their I.P.A. On Tour Limited Engagement series. You may recall that I tried Blind Faith from this series a number of months back. I also have a third edition called Encore in my refrigerator now.

So let's see. This series was "specially formulated to entertain the palates of hop lovers worldwide". The label art depicts a record, Side B. The track we are about to try is Black IPA. Colorful, fun idea with the name and artwork.

Good head. Sweet caramel and chocolate with a faint roast. Don't really smell anything IPA about it at all. Roasted malt flavors dominate in the beginning. Some char, a hint of smoke and flat coffee flavors also add to the initial basket. However, there is a definite hoppy component, though not as forward as I expected. Rather, this is like an IPA was kidnapped by the malt man and is now trying to escape the trunk of the car where it was imprisoned! Seriously!

The flavor are decent, about par for the course with this style of beer. The burnt roasty semi-bitterness was a little harsh, a common complaint from me, but I've had way worse. I blame much of this critical analysis on the style in general, but I am certainly trying to be objective. Go ahead, check it out! There are some nice flavors for you to ponder. 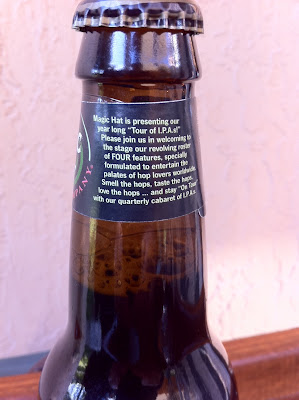 I haven't seen this one yet on my local shelves- gotta love the music theme.

I do usually enjoy the themes and art work from this brewery. Not in love with their beers, in general, though they have some I like.