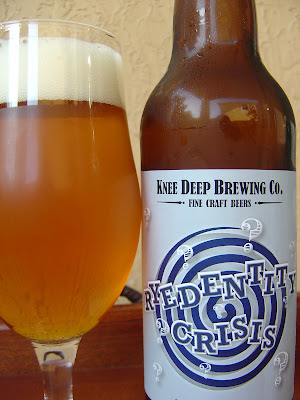 Today I'm drinking Ryedentity Crisis brewed by Knee Deep Brewing Company in San Jose, California. I had never heard of this beer or brewery until a few weeks ago when Beer Zenmaster Ed Roberts said Total Wine would be getting a handful of new "Brewery-Direct" beers. Sure enough, I bought this one around a week ago.

But being the good journalist, pfft, I went online to dig around. Five seconds later, I was reading an article about this beer written by The Beer Wench. And it gets even better! The Beer Wench was part of the brewing team for this beer. She, Knee Deep and buddy brewery Devil's Canyon collaborated to create a beer that shunned all of the beer geek style guidelines, a feat that I truly appreciate. Reading further, this was launched during San Francisco Beer Week, just a week ago, so how it ended up in South Florida a few days later I'll never know. I guess it's fresh though. Anyway, go read Ashley's (The Beer Wench) article. I can wait for you to come back. Update: Knee Deep Brewmaster Jeremy let me know, nicely, that the reason the SF Beer Week and Appearance in S. Florida were so close is because they actually weren't. You see, the launch was in February, 2011 and this, my dears, is 2012. I guess I need to pay attention better. My beer was brewed in January, 2012, however, so the fresh comment is spot on!

Now, absolutely none of that information is on the bottle label, which is unfortunate. Beer lovers like those back stories and gossips that go with their craft beers. This label is silver with a few floating question marks and a block letter name on it. Very boring, despite the creative name. The label does let you know it's a Rye Saison Ale with 8% alcohol and 27 IBU.

Doughy aroma with spicy rye and a nice fruity background. Very soft apple and peach flavors are the first to kiss the palate, lightly sweet and enjoyable. They are backed by some distinct peppery rye jabs at the palate. Nice contrast. There is a yeast and musty quality that you would expect from a saison too. A touch of honey and a touch of hops round the profile off.

Nice refreshment, quite flavorful. Carbonation is good. Body just right. The 8% alcohol offered a little presence toward the end with a little dryness. Overall, I feel Ryedentity Crisis was balanced, yet just a little too sweet. I wanted just a little more zing, whether from the rye or alcohol or a citrus component. But that doesn't mean I didn't enjoy it and will totally seek out Ashley for an autograph next time we cross paths (which would also be the first time). I think she's ignoring me because I root against OSU basketball (because they are good), but that could just be my insecurities speaking.

Actually, just as I was about to hit Save... She talked to me. OMG OMG OMG LOL. Haha. And I have proof, submitted to the Library of Congress.

Check out the beer if you can. Report back here with results.