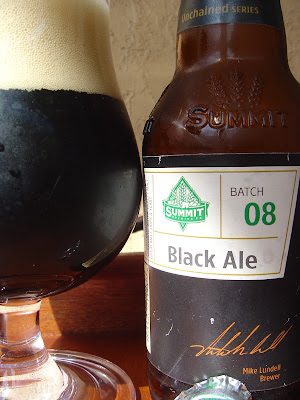 Today I'm drinking Summit Black Ale brewed by Summit Brewing Company in St. Paul, Minnesota. This is part of their Unchained Series. Batch 08 is signed by Brewer Mike Lundell. I've seen homebrews with sharper labels, but whatever, it's the beer that mostly matters.

Chocolate, cocoa and roasted malty aroma, a little hoppy too. Chocolate flavors also come through right in the beginning, and the roast too. But those flavors are accompanied now by a bit of flat cola and stale coffee buddies. There is also definitely more bitterness in this guy than I was expecting based on the aroma. Some lemony citrus rind breaks up any sweetness. Smooth, but a little too smooth, as this beer leans to the flat end of the beer spectrum.

The roasted bitter staleness was not that enjoyable overall. However, I will admit that a little warmth took some of that edge off, though not entirely. Perhaps I am being a little hard on this beer, but I was expecting a bit more after thoroughly enjoying one of the other Unchained Series beers. Honeymoon Saison was fantastic.