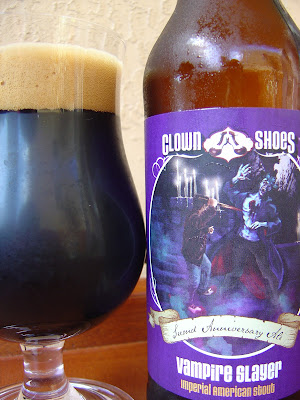 Today I'm drinking Clown Shoes Vampire Slayer brewed by Mercury Brewing Company in Ipswich, Massachusetts. (Speaking of Massachusetts, you guys see that Boston Beer made a Boston Marathon beer and wont share it with the rest of the country? Pfft! LOL.) Anyway, Vampire Slayer is their American Imperial Stout. I'm sure you remember the rave review I gave of their Russian Imperial Stout just a few weeks ago, right?

So Vampire Slayer as a name? Yeah, I was thinking that too. Pretty tame for a brewery that usually combines words that don't go together or makes them up to suit their needs. I guess the fact that they are calling this their Second Anniversary Ale might make them want to be a little more normal. You know, so when they look back in 20 years they aren't like WTF!

The art work depicts a guy wearing jeans and enormous Clown Shoes putting a stake through a Vampire's heart. Unfortunately the room is only candlelit and the artwork is much too dark. I get that it's supposed to be dark in there, but for the purpose of showing us what's going on, they need to brighten it up a little. Even sex scenes in dark bedrooms in movies are well lit, if you catch my rationale. There is a story on the side which you can read below, but my favorite part is that they brewed this with Holy Water and malt smoked with Vampire Killing Stakes. Haha. Bottled 2/2012. 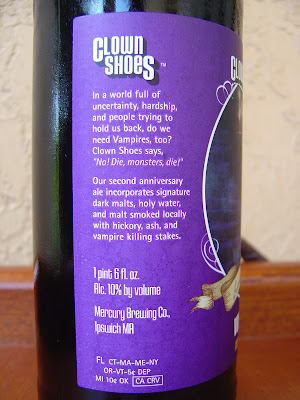 Nice cocoa and smoke combo for an aroma. Sweet chocolate and dark cherry flavors are most prominent at the beginning. The smoke is instantly noticeable too, but thankfully it is nuanced and not overdone. There are actually more roasted malty flavors than smokey ones, and no char or burnt flavors to be found, again a positive comment. Wood, toffee, plums, licorice--just a few of the nuances that you will taste as you drink your way through Big 22.

I mentioned those secondary flavors above. The 10% alcohol really does a good job bringing those to the forefront. Yes, there's a little booze and heat in the chest, but this beer tastes deceptively weaker than the stated alcohol content.

After drinking the entire bottle and looking back, I was at first going to say this was on the sweet side. But by the end of the bottle, a hoppy profile started to stand out. And along with the alcohol and light bitterness from the roast, I feel this beer was pretty well balanced.

Good body, clean, not syrupy. Lacing was really terrific if that's one of your fetishes. And you know what? I could really taste the Holy Water and effects of smoking over Vampire Killing Stakes. Mmm. Really nice beer, though I give an edge to the Russian Imperial Stout. Darn Ruskies! :)