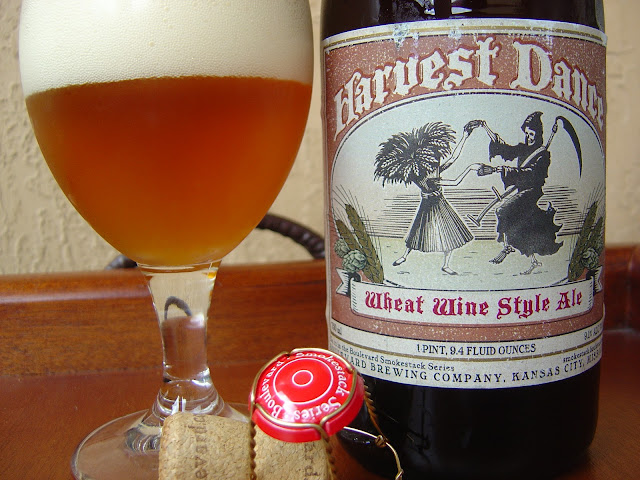 Today I'm drinking Harvest Dance Wheat Wine Style Ale brewed by Boulevard Brewing Company in Kansas City, Missouri. This beer is #11 in Boulevard's Smokestack Series. This beer came back from Houston with his buddy Tank 7 Farmhouse Ale, compliments of my buddy and his business trip. Thanks again.

So the artwork is kind of interesting. On a washed-out red background is a depiction of The Grim Reaper dancing. It appears that in a change of heart, he used his death-sickle to harvest a field of wheat, using his powers for good. Now that the wheat is bundled (and magically grew legs), they are dancing in pure bliss and merriment! Go figure the power of beer!

The back label offers a story about John Barleycorn and his Midwestern cousin, Wheat. This beer is a celebration of the cousin. Batch 2-2011. Best by 06-2012.

Big Cork Pop! Enormous foamy head that wouldn't recede in any amount of time. Jeez. Tough to sniff through the foam but eventually I got the chance to smell a nice citrus lemon alongside some wheat, yeast and even a touch of hay funk. 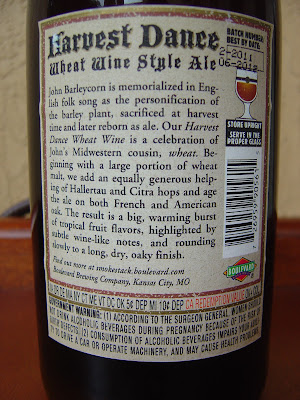 Doughy flavors hit first and those are complimented by some oak, apparently a result of the aging. Fruity apples and pears are a major player in the beginning as well, and those flavors work awesomely with the spicy clove that keeps weaving in and out of the picture. After a few sips, the beer starts to grow on you. Yeah, it really is one of those kinds of beer. You start to taste many wine-like qualities. Grapes and some acidity and tartness, even approaching sour at some stages.

But the citrus lemon comes back, and you taste some floral hoppiness. The 9.1% alcohol provides some heat and even a light burn in the chest and back of the throat. By this point in drinking the wine bottle, you will really begin to notice just how yeasty and wheaty and bananay this beer really is. You may think you are drinking some Belgian-style crossover.

Yeah, the head is really starting to piss me off and has become quite the pain in the ass. Carbonation is prickly on the lips and palate, working with the alcohol to even provide a light burn. Finish is spicy and lasting. Once again, I will state that this beer was twice as nice warmer, about 30 minutes out of the fridge. I don't understand why I can't learn that lesson. But certainly beer could (and should) be used to teach the values of patience. Probably the world would be a better place! Check out this beer if you can. I think I'd lean toward the Tank 7 but this was a very nice brew.

Posted by Beer Drinker Rob at 9:46 AM