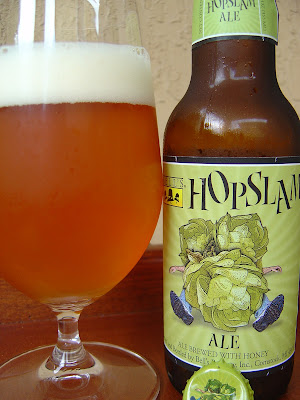 Today I'm drinking Hopslam Ale brewed by Bell's Brewery in Comstock, Michigan. Yes, this is the sought after and famous Hopslam that everyone gets all jacked up over each year. After being toyed with about its arrival for more than a month, I by chance was talking to the distributor in Total Wine who asked me, "You're not one of those guys that's looking for the Hopslam, are you?" I told him I was and for a mere $22 + tax, a sixer was mine. That's only 10% higher than last year, hmmm.

Sounds expensive right? It should and it is. But the funniest part of the "expensive price" analysis and conversation is that the price of "bombers" never comes up in the same breath. If I told you a bomber of great beer cost $6.72, you'd think that to be a pretty sweet deal right? Well, boys and girls, that is the equivalent price per ounce to your precious Hopslam! Why does it take a $12 or $15 or $20 bomber or wine bottle (which only has 25.4 oz) before "Bomber Suckers" get up in any kind of tizzy over a bottle approaching expensive-land. A $15 bomber of beer is the equivalent of a $49.09 sixer, easily more than double Hopslam. Now THAT is expensive!

So I went all-in the other night on Twitter, first suggesting that Bell's should wise up and end Hopslam in six packs. They should totally be bomber-only beers and charge $9.99 each for them. No beer geek would bat an eyelash for such a great beer in a bomber. They'd probably think it was too good a price to be true. The "expensive sixer" comments and complaints would stop. And they'd make $32.69 for the same six pack equivalent volume, while further saving money and the environment by using less glass and cardboard packaging. Pretty sweet deal.

Then I took it a step further and suggested they say "Fuck it!" and have one of those Brewery Release Days where insane fans come and stand in line to buy $20 Wine bottles of Hopslam. They could then sell the rest of the beers through their distribution channels if there were any left. That would make the equivalent six pack $56.69 or more than 2 1/2 times more for the same volume than what we are currently paying. They would again have less packaging and wouldn't need to pay as much for distribution. Tack on the extra revenue they'd make for the release parties (not to mention the awesome good will bottle shares, etc, that go with such an event), the 3-4% savings in credit card processing fees because they only accept cash, and Bell's is crazy not to hire me as a consultant.

Wanna hear about the beer? OK. Well, this will be the third year it's been distributed to South Florida. Here is my review from last year. The packaging is all the same. My bottle is from Batch 10938, bottled on 02/10/2012.

Beautiful tropical peach and pineapple aroma. There are also some underlying pine and pungent hops in the bouquet. Tropical fruity flavor start as well. A nice mix of hoppy bitterness is very much present, however. Pine and some nice citrus zing are great complements to the sweet beginning. Sweet orange and honey fight back again only to be answered by some spicy nips. The 10% alcohol adds some warmth and a tiny little bite, but mostly it works at promoting all the delicious flavors. Bitter and sweet are separate yet happily married. Sticky but not syrupy, nice body. Terrific beer, no doubt about it! Get some! 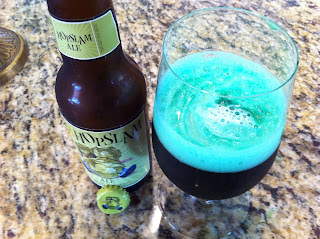 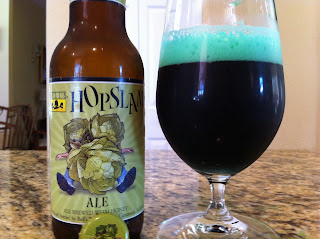 Posted by Beer Drinker Rob at 9:24 AM