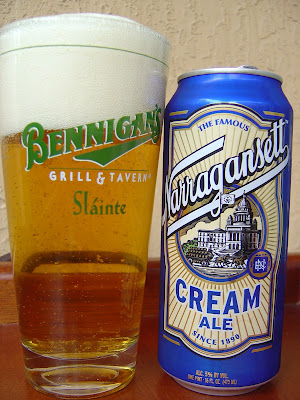 Today I'm drinking Narragansett Cream Ale brewed by Narragansett Brewing Company in Rochester, New York. I was recently sent two 16 ounce tallboys by their communications agency for a review. Thanks. According to the press release which they also sent, this is a "craftier" version of their beer which was super popular back in the 60's and 70's.

There is a "Hi Neighbor!" story on the back that talks old-time parades and nostalgia. Check it out. The other thing I know about this beer is that a fan vote made this one the new year-round beer for the brewery. The other option was a Rye Ale, which I happened to vote for. Seems I'm pretty good at picking the loser, even out of only two options. Oh, well. Looking forward to this.

Fluffy white head, almost overflowed my Bennigan's True Pint glass. Toasty aroma, fresh grain with some light sweetness. The flavors are interesting up front. I couldn't help but imagine buttered toast followed by vanilla cream-filled cookies. Not sweet but rather nicely balanced with some grassy bitterness, especially toward the end of each sip. 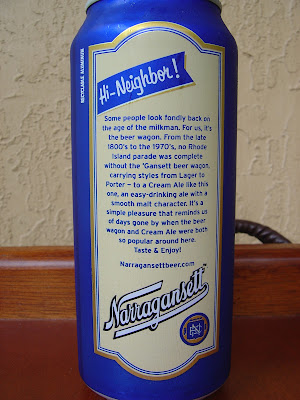 Toasty, light nuttiness. Creamy carbonation felt great in the mouth and the low-medium body was enough to not taste watery and not overdone to lose refreshment. The 5% alcohol was not noticeable. Very enjoyable. Fresh off of five hours of Little League games this morning, it absolutely hit the spot!

Hahaha. Them there are fightin' words!

Yeah, really, buttered toast and vanilla cream cookies, that's the right answer. Can't wait for my other tallboy of it later.