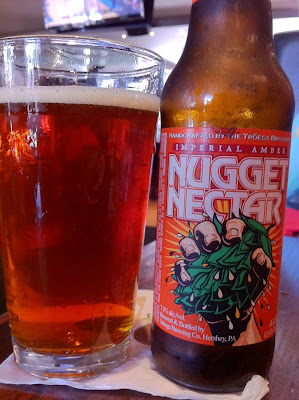 Last week I had a case of Troegs' Nugget Nectar in my hands. Because the stupid Distributor laws in PA say the guy couldn't sell me less than a case, I had to decide whether the two days left in my vacation was enough time to make the purchase worthwhile. I left without buying any beer, only to go home to the tired old leftover Yuenglings. (I did discover Booker's Bourbon in those final two days, so all was not lost!) There would always be another year to perhaps try Nugget Nectar, right?

Well on the way out of town, we stopped by PNC Park for a few pictures and lunch. After trying the East End Big Hop on tap, I asked for a bottle of Nectar Nugget, as SoHo's menu listed the beer. I told the server about the reversal of words and she said, "I'll be sure to let them know". I'm pretty sure she rolled her eyes when she walked away. Stupid beer geek! LOL.

So I finally got to try this beer. After I poured it, I had to ask the same server to leave the bottle for just a few more minutes so I could read it and take a picture. Stupid beer geek! My big burger came just then as well.

Hoppy aroma but not too strong. Much hoppier flavors and bitterness right from the start, though. The hops are actually quite spicy, with a rye kind of black pepper spiciness jabbing at the palate. There is definitely a caramel malty balance, but the bitterness is the star throughout. Delicious!


After a handful of sips and writing my tasting notes, I dug into my lunch. My Black and Bleu Burger had some hard-core spicy crust on it that actually drowned out the rest of this beer experience. It could have been any beer and I regret not drinking the entire bottle alone first. Oh well. See you again in 2 or 3 more years, Nugget Nectar!

Posted by Beer Drinker Rob at 8:43 AM