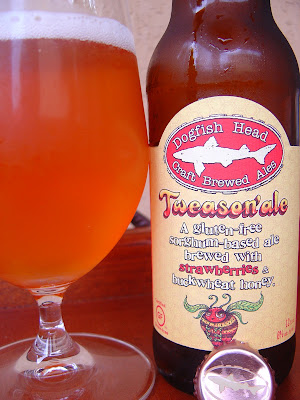 Today I'm drinking Tweason'ale brewed by Dogfish Head Craft Brewery in Milton, Delaware. This is a sorghum-based beer brewed with strawberries and honey, their shot at making a gluten-free beer so people with Celiac Disease have something to drink. If anyone can make something palatable in this style, it's Sam and Dogfish.

It appears that Dogfish has done a light upgrade to its very standard 12 ounce bottle labels. You start with the same faded pastels you see on some beers, but the lettering appears more interactive and there's even a playful little strawberry-bug doodle at the bottom. Certified Gluten Free.

The nutritional facts have their own panel on this beer. I'm not sure if that was somehow required because of the special dietary nature of this beer, but they and all breweries should put that info on all beers. Here is just one example why. I think you guys would be shocked how many readers come to my site because of their quest for beer nutritional info. Brooklyn Brewery provided me some of theirs, and the offer still stands for any other brewery that may like a similar post--just send me the data.

You long-time readers may remember one of my most popular posts ever on this blog, one where I dismantle the horrible-tasting New Grist beer, also a sorghum-based "beer". Don't even remind me. But the comment section is pretty fun. Feel free to jump in. Well, I can't say I ever planned on giving another beer like that a try. But here we go. 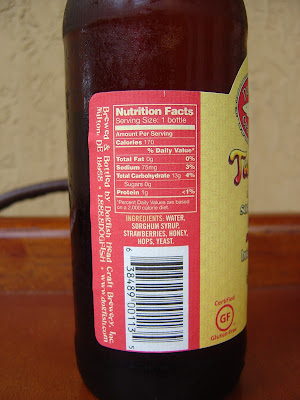 Smells like strawberry soda, sugary sweet, a little grainy, but I'd have guessed wheat. Oh No! I was praying for something along the lines of the fantastic Samuel Smith's Strawberry Ale. That was probably an unfair wish, but I have no problem sharing my dreams and fantasies with you.

A nice, lightly sweet strawberry flavor in the very beginning was dead in a flash. Horrible, ugly grainy sorghum flavor just sucked the life out of everything else. I mean the texture is fine, the beer tastes clean. Just the flavor of this alternative base sucks. Floral but dirty, earthy, like gnawing on a cardboard box. Terribly unpleasant.

The beer thins out and dries out after that initial sweetness too. A touch of hoppy bitterness tries to wipe away the flavors toward the end but is just out-manned. Balanced well. I think Dogfish should brew this one with Barley and call it "Ain't Tweason'ale" and I bet that would be fantastic! But if I ever contract that disease, I would never drink these beers. Cider would be waiting for me.

Look for those doomed to live out a gluten free life, unfortunately Tweasonale is like winning the jackpot. Most ciders are to sickly sweet to drink more than one of (unless it's Strongbow) and sometimes when all your friends are out drinking beer it's nice to be able to join in and not look like the alcoholic tossing back whiskey all night. Gluten free beer seekers, this is your best bet!

I feel bad for the situation but would hardly call this the jackpot. Fox Barrel and Crispin make some ciders that I didn't find overly sweet. Here are two:

But... If you guys like Tweasonale, that's awesome. Drink up!

hi rob. can im new in beer drinking niche. can you please make a guest blog on my site. Http://glutenbeer.com email me at philipjohnsantiano(at)gmail.com