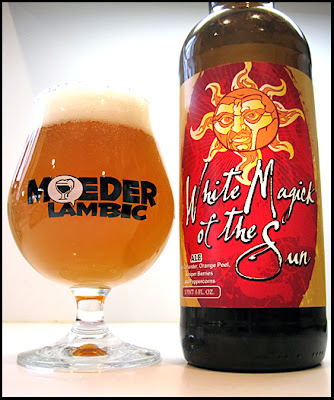 Today one of my Twitter friends wrote a guest post. Ethan aka Brewniversal actually sent me this about a week ago but I couldn't give it justice until today (meaning I am not that good with my iPhone). Oh, and Ethan is also from Philly, so those are bonus points! Thanks!

White Magick of the Sun

(Also, it’s probably the polar opposite to Voodoo’s Black Magick -- a stout aged in bourbon barrels)

The bottle was a bit of a gusher when first opened but it wasn’t unmanageable. Pours an opaque orange/tangerine with obvious yeast sediment. A big, rocky snow-white head sticks around for the entire ride -- obvious aggressive carbonation going on here too.

Nose has the typical wheat beer aromas… clove, slight banana, and the coriander but the one thing that sticks out are the juniper berries. I can literally almost get a gin-like aroma when I think about it and it doesn’t distract from the beer in the least.

Taste is spot on with the nose – starts with the witbier flavors coming out initially, followed up by the gin-like juniper berries and finishes with a nice spicy snap from the pepper corns that ties the whole thing together.  Carbonation is aggressive but doesn’t distract from the beer. The alcohol is unnoticeable with all of the spices going on.

This will unquestionably be a nice thirst quencher/ lawnmower beer when the dog days of summer (read: shit-tons of humidity) come to the Philly area. I’ll definitely have a few bottles of this around.
Posted by Beer Drinker Rob at 2:00 PM