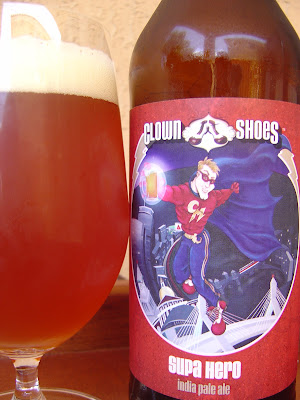 The label on this bomber bottle depicts "Boston's own Supa Hero, Captain M., The Protecta of The Bee-ah!!" That's what the story to the side says. LOL. This guy drinks while Supa Heroing, too! Bottled 1/2012.

Enormous pine aroma and tons of spicy rye-like scents too (though I don't think this beer has rye in it). The bouquet is very potent, fresh and hoppy.

Quite the bitter hoppy flavor entrance too, first sip! Pine is quite resinous with an awesome black peppery spicy kick. The 8% alcohol accentuates that spiciness and adds some heat to the mix. There is not much of a citrus component, though there is just a little sharp rind bite.

Though this beer clearly leans way bitter, there is a noticeable caramel sweetness in the background. Nice carbonation. Fairly straight-forward piney and spicy hoppy bitter beer, but it was enjoyable. There was never any astringent or annoying bitterness. However, you clearly must not be a hop rookie and must love piney hops. I do. Nice beer, though even at only $6 for this bomber, I don't appreciate paying for the equivalent of a roughly $20 sixer. 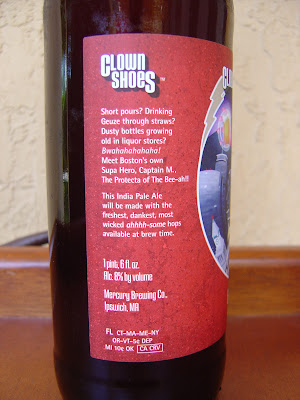 Posted by Beer Drinker Rob at 8:21 AM