Longshot A Dark Night in Munich 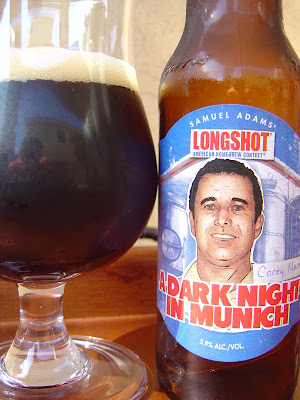 Today I'm drinking the third and final Samuel Adams Longshot beer for the year. This one is called A Dark Night in Munich, a Dunkel created by homebrewer Corey Martin. I've already tried Derf's Secret Alt and Five Crown Imperial Stout, so I guess I'll rank them when I'm done here. Best Enjoyed before August, 2012.

Malty rich caramel aroma with some toast and a hint of smoke. Light chocolate and caramel flavor base in the beginning. Again, there is a toasty aspect with even a little nutty edge to it. Light roast and just a little smoke in the background.

Thinner than expected and not as sweet as the aroma led me to believe. There are enough hops to drive this to practically neutral balance. A little spicy toward the end. Carbonation is high and just a bit stabby rough on the palate. The 5.9% alcohol really isn't noticeable. Good flavors throughout, and you are left with a pleasant lasting aftertaste.