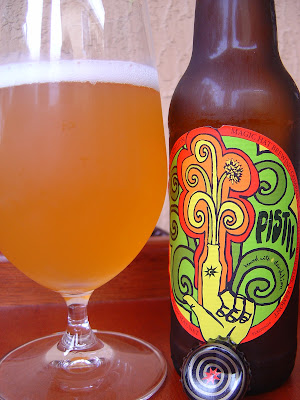 Today I'm drinking Pistil brewed by Magic Hat Brewing Company in South Burlington, Vermont. This beer is brewed with dandelions, so let me get that fact out of the way up front. The brewery provided me this sample a few days ago, so thanks to them for that. The label art is very colorful, almost the entire rainbow. A hand formed to look like a pistil is pointed upward and apparently has just fired dandelions from the barrel. Hmmm. I guess not unexpected from this brewery, as they are even more Off-Centered than that other brewery.

Lemony with a fresh, grassy aroma, and you can definitely smell the dandelions. How am I so sure? I grew up in rural Pennsylvania and have mowed more grass and been assigned more weed-picking duties than most people can even imagine. The never-ending property belonging to my summer job employers was quite the training facility!

Flavors start out lemony as well. And mere hoppy bitterness was not enough for this beer apparently. Pistil went full-on sour. Plenty of citrus, very grassy, lemon-face. Fresh and crisp. There is also this persistent funny flowery flavor, which I'm guessing is the dandelion effect. As expected, though, you will get used to the sourness after a few sips. The 4.5% alcohol wasn't a factor at all. Yes, it was a little weird, but a refreshing summer beer nonetheless.
Posted by Beer Drinker Rob at 7:39 AM