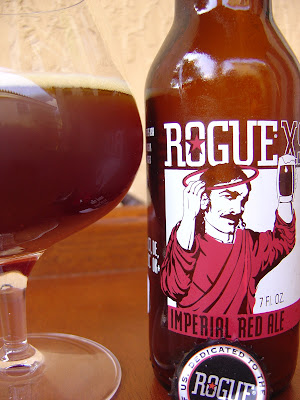 Today I'm drinking Rogue XS Imperial Red Ale brewed by Rogue Ales in Newport, Oregon. This one used to come in the ceramic wine bottles, and perhaps it still does. However, Rogue started bottling this and other beers in the series in 7 ounce ponies, the kind you can sneak into class, assuming you have 500 students and a balcony. That memory (of someone else) seems to fit as the label depicts a guy trying to pass himself off as an angel, even as he holds the halo in place and a mug of beer in the other. The ingredient list is also published on the side panel.

If memory serves me right, these ponies were originally marked at $4.99 each, which made me pass all day and all night. Just a few days ago, I saw them on the bargain rack for $2.99 each in what was an apparent close-out. And there were no other bottles still on the shelf, so I'm guessing the price per ounce wasn't a big hit. After all, even $2.99 for a half-bottle is no deal for a normally well-priced brewery (think $31 six packs). But being the scientist I am, I grabbed this and one other. The Total Wine sticker on the back further backed up my hypothesis as it was dated 7/21/11. 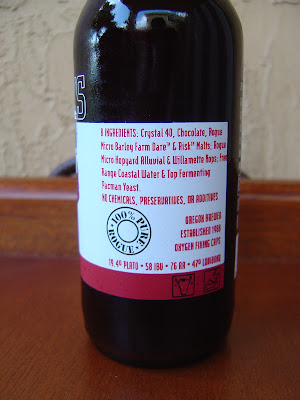 Since it was a small volume, I used my Hennessy Snifter. Almost no head. Rich caramel aroma, a little figgy and spicy with a touch of oak. Caramel base has good body and texture. Then some citrusy lemon rind really bites into that initial sweetness. Astringent and not welcome.

The alcohol is noticeable. Not hot, just alcoholic. Pine and citrus followed by more caramel. Carbonation is almost non-existent. Very smooth. Was OK but not like two other Imperial Red Ales I've had recently, Lagunitas Imperial Red and Tocobaga Red Ale. Not only was this beer not like them, but those two beers knocked XS out in the first round! Perhaps being dated was a factor but today this one was not that great. I didn't see any dates from Rogue either, so it's only the generosity of Total Wine that gives that possible excuse.

I've had quite a few Rogue ales and didn't really care for any of them. I still give each one a shot though.

I don't know man. I didn't like this one that much, and it could have been an age issue. But Rogue has some great beers. And they are one of the first craft beers I remember trying, mid 90's, so there's that nostalgia. The cool bottles are etched in my mind.

I love their artwork for sure. I think my favorite one was John John Juniper. I really want the bacon maple and there are a few common ones I need to try but I'm going to get to their brewery before long.