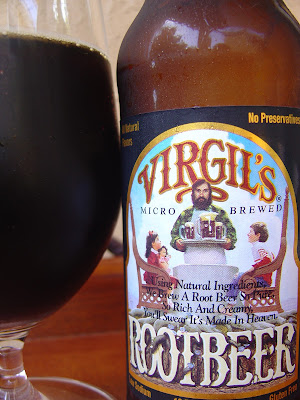 Today I'm drinking Virgil's Root Beer micro-brewed by Reed's, Inc. in Los Angeles, California. Don't you guys worry. I'll be drinking a beer later too. But I recently picked up this bottle that was misplaced in the beer aisle at Total Wine by some inconsiderate patron. And I took it home for today!

It's hard to say exactly what's going on in the label cartoon. The table has roots growing from it, and it's obvious that the two children are eagerly awaiting a glass of this root beer. Servings have just arrived. "Using natural ingredients, we brew a root beer so pure, so rich and creamy, you'll swear it's made in Heaven."

The ingredient list is pictured below, and a story as well lets you know exactly what to expect. Serve Chilled (Without Ice). The nutritional facts are also printed, though I forgot to take a picture and am too lazy to go do it. Anyway: Serving size: 12 oz. Per Serving: Calories: 160, Total Fat 0g, Sodium 0g, Total Carb. 42g, Sugars 42g, Protein 0g.

Nice aroma, like those root beer barrel candies, a little spicy, intense anise, sinus cleansing in a great way. Really smooth and super complex flavors. Vanilla and molasses are really nice in the beginning, intertwined and delicious. You will get this persistent cooling feeling, not powerful but similar to that from chewing a minty gum. Licorice and brown sugar are also noticeable. Sweet but not too sweet. The carbonation was very low and I do wish there would have been more. Excellent root beer, though I am a rookie in the space. This from the guy that normally drinks Diet A&W, and only once in a while. 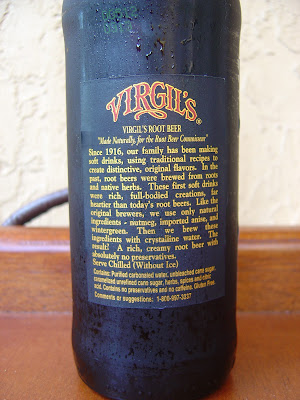