After Ed Roberts and I did the tour and tasting at Schnebly Redland's Winery and Brewery on Sunday, we stopped by Cervezas on the way home for a few beers. Neither of us had ever been there before, so we decided to check it out. We arrived around 3:30, which was apparently 30 minutes before they opened. LOL. So Ed and I wandered aimlessly for 20 minutes. When we returned, the staff including owner Carlos Duran were setting up tables outside and getting ready for business. We were permitted to enter a few minutes early. Very cool (to get out of the heat)!

First beer I chose was Stone Smoked Porter with Vanilla Beans. Ed grabbed a Terrapin Reunion Belgian Dubbel. We paired those and each subsequent beer with my first dose of pro basketball in quite a while. Yep, the Heat were on TV and everyone there was totally into it. The Stone beer had a nice roast and tons of vanilla. It was a nice beer overall, good texture, though I felt the vanilla was a little much. The Terrapin Reunion had great cherry and fig and raisin flavors. I initially called it out for being hot because of the alcohol, but after a few sips, Ed and I identified that sensation as some hot chillies that kept building and building. 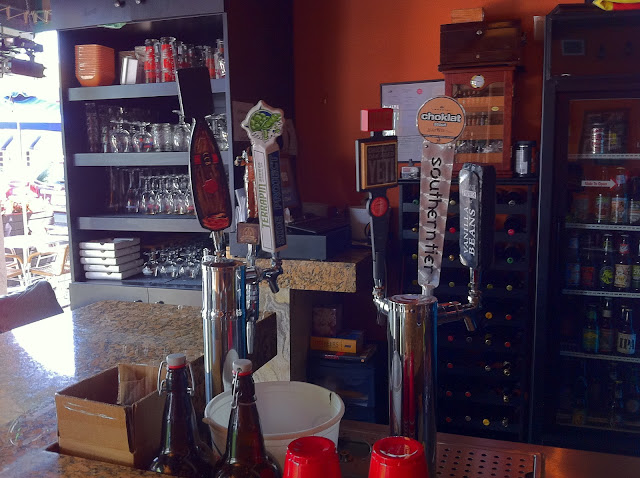 For a donation to a local charity, I was able to sample Funky Buddha Last Snow. The aroma was incredible! The freshest, richest coffee ever with hints of chocolate around the edges. I was gonna make out with it but there wasn't enough privacy. I didn't, however, really taste any coffee flavors at all. Very surprising. There was a lot of coconut and a nice mellow malty base. Very enjoyable.

Ed and I were both asking our server about Tequesta Big Hitter. We were told it is a Red Ale and were both offered a small sample. Very sweet with malt forward flavors. The sweetness offered caramel and was even candy like. Ed compared it to a Belgian-style beer, though we didn't think that type of yeast was used in the brewing process. Balance was OK, though it definitely leaned sweet, and there was a dry finish with a hint of alcohol. Not bad. 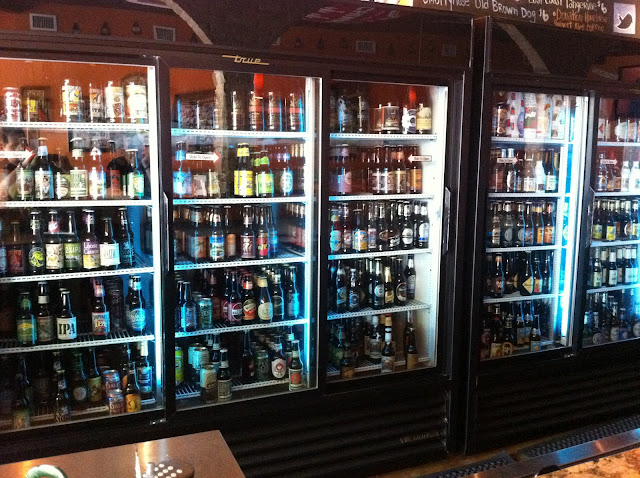 Two All-Stars up next, way better than Lebron and D-Wade. Yes, I'm talking about Southern Tier Choklat and Brooklyn Sorachi Ace, beers you'd rat out your own mother for. The beautiful, rich, luscious chocolate flavors of Choklat, delicious all around. I do wish it were slightly sweeter but perhaps that's just me. And the wonderful fruity and lemony flavors of Sorachi Ace, tart and spicy and refreshing. Farmhouse but not really funky, just perfect.

About that time, two funny anti-craft beer events happened. A dude bellied up to the bar and ordered a Heineken for his wife. He was rejected worse than a few of the Heat players going in for layups. But this guy was persistent. His substitute request was for "a Holland lager"... and he got something. Personally, I think they should have Heineken, especially when they are using a Heineken Chalk Board in the front of their bar to advertise beer specials and events (you can see it in the first photo above). 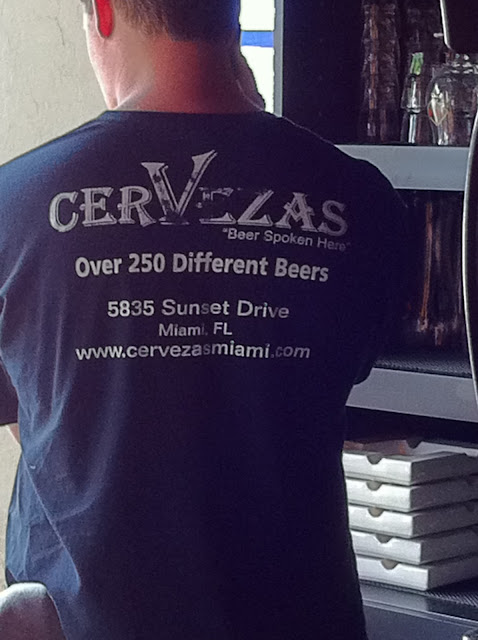 Next, a dude who was sitting outside with his wife came in and ordered a Dogfish 60 Minute for himself and a Corona Light for his wife. He quickly said either that or the Dogfish beer with herbs. I chimed in "Saison du Buff" and he confirmed that was the one. Said she won't drink any others but those two. LOLz. What a massive difference between the two options.

Finally, Cigar City Maduro was on nitro so we had to take a run at that. Creamy and luscious, though both Ed and I felt that the aroma and flavors were totally muted. Very soft brown ale aftertaste was about it. Pictures and texture were great (see progression below), but the beer didn't seem to appreciate the way it was served.

So that's how I ended up American Craft Beer Week. Yes, I did get out to like four events, so you all can drop the "he never leaves his house" bit. From Boynton Beach to Pembroke Pines to the Redlands of Homestead to Coral Gables in a week. Yeah! 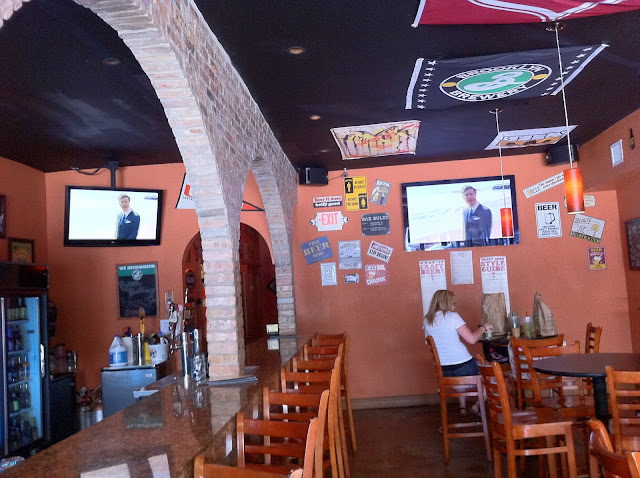 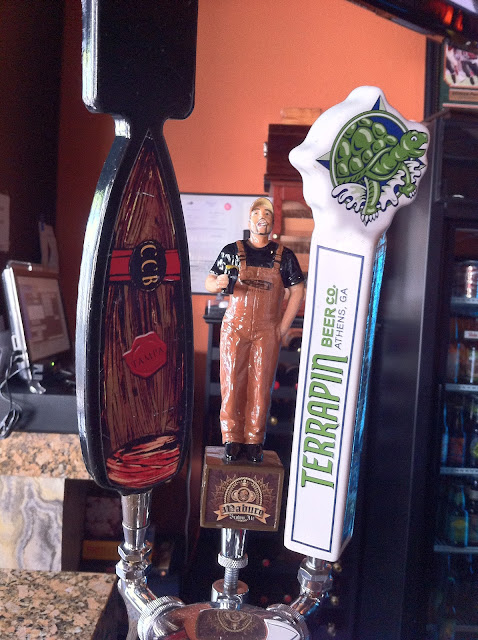 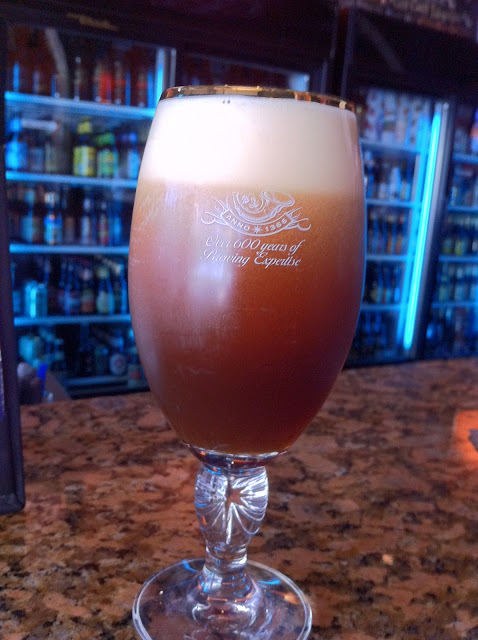 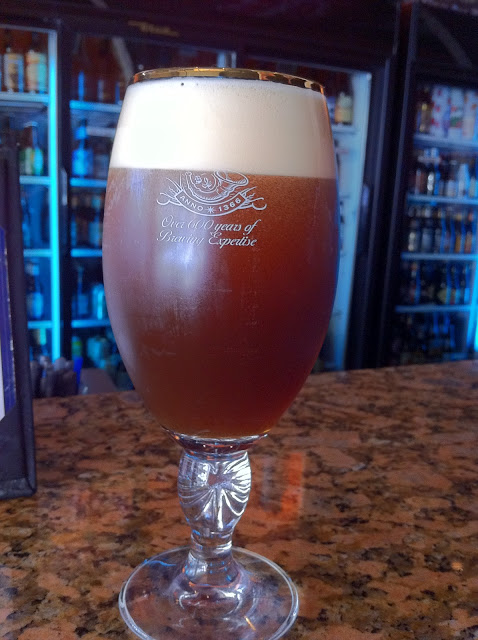 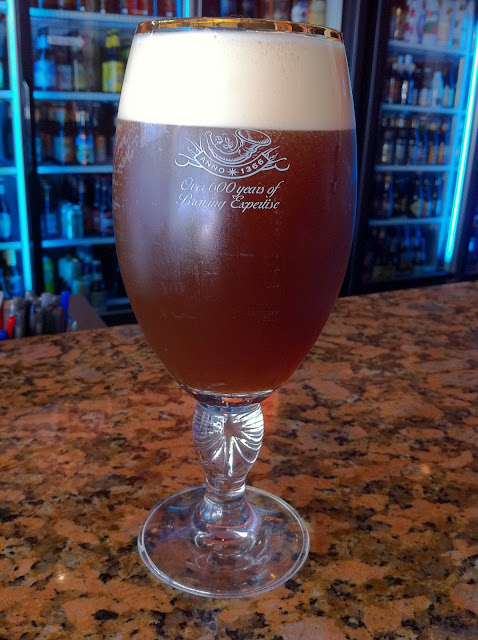 Posted by Beer Drinker Rob at 9:48 AM