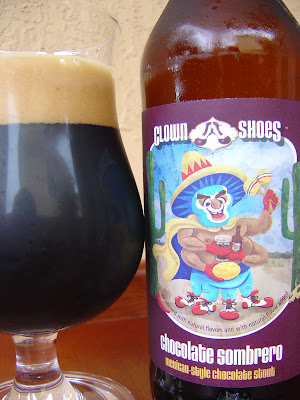 Today I'm drinking Clown Shoes Chocolate Sombrero, a Mexican-style chocolate stout brewed by Mercury Brewing Company in Ipswich, Massachusetts. There is a recipe for this beer on the side, and one of the ingredients is the "chocolate loving, beer drinking, Clown Shoes wearing, multi limbed, gorgeous and glorious Mexican wrestler", depicted on the front of the label. Love it! Big 22 Bottled 3/2012.

Nice aroma. Chocolate, cocoa powder and lots of cinnamon on the nose. Great milk chocolate and cocoa powder flavors, pretty sweet. The rich and creamy texture is really noticeable right from the start too. There is a little roasted malt character and plenty of cinnamon spice flavor throughout.

Now the bottle advertises Ancho Chiles, but it takes a while before you start to taste and feel their effects. Only on the finish is there a little heat in the mouth and warmth in the chest. I am a little disappointed that they were so muted. 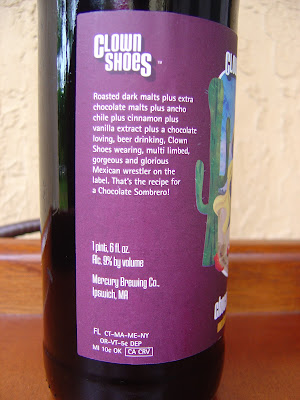 Thick and chewy, this beer coated the palate completely. Really nice body. Very smooth. The 9% alcohol helped knock down the sweetness a notch or two, and you certainly know this is an adult beverage, but it's very much incorporated into the beer.

While enjoyable, I really wanted more chiles. The flavors were nice but it was just a bit too sweet. And finally, the cinnamon was a bit much after drinking the entire bottle. I'm thinking someone made a mistake and got the amounts of chiles and cinnamon reversed. If not, that's a suggested recipe change. But what do I know? I preferred Sam Adams' The Vixen a bit more, and I'll be massively disappointed if my bottle of Hunahpu doesn't blow this out of the water. But is was a solid beer for sure.

Hello Hello! You know, this one sounds really tasty. Love the label as well ^_^ I was expecting an odd clown with huge chocolate shoes...thank goodness it's different haha.

Sounds great. I hope I can find this once I hit the east coast.

Hi Tahira. Yeah, this is a fun brewery. The labels and names are a bit gimmicky across the board, but the products are in general very solid to excellent.

Not sure the full distribution list, but you'll probably be able to find the beers from Clown Shoes.