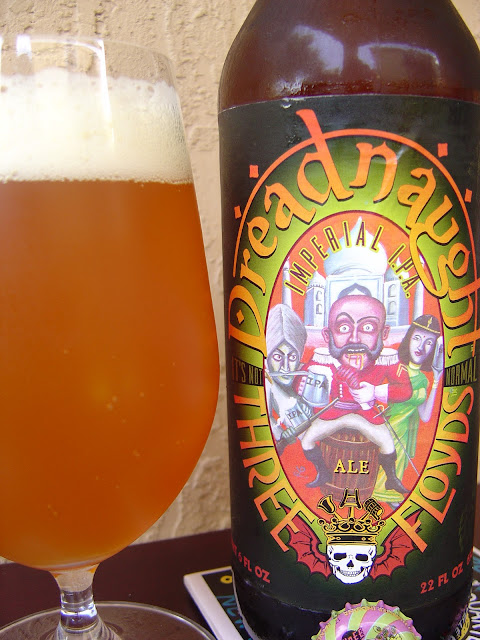 Today I'm drinking Dreadnaught Imperial I.P.A. brewed by Three Floyds Brewing in Munster, Indiana. Though this brewery's beers are not distributed to Florida, I've had the opportunity to trade for a few in the past. Pride & Joy Mild Ale followed by Broo Doo Harvest Ale and Moloko Milk Stout actually all came from Marathon Marie (pre-baby) as part of our two trades.

This beer, however, has its own story (no, I didn't move to Indiana). About a week ago I was thinking up some wise-ass comments to post to Twitter when an email appeared in my inbox. Not just any ordinary email. Fan email (if you guys can believe that). Turns out that a local guy that does some business travel had collected too many bottles on the road and decided to offer me this little gem he had picked up recently. What an awesome gesture! I met the guy, and we chatted for a while about his hophead syndrome and what other awesome beers he's had on his travels (Double Jack), which made me drool.  Oh, and it seems that he has the real job that I want, too, but that story is for another time. LOL. Thank you!

Unsurprisingly, the label art on Big 22 is very colorful and whimsical. An emperor of sorts is sitting on a barrel of beer in front of his palace while a servant gives him two mugs, each labeled IPA. I guess having two makes that a double IPA. The queen watches on while toasting with her own mug. You are also reminded that "IT'S NOT NORMAL", presumably referring to the beer/brewery. The little story on the side sets up your expectations, starting by calling this "A hophead's dream beer".

Mango and tropical fruit meet sweet orange citrus for a fabulous aroma. A fresh hoppy bouquet lies just underneath that fruity experience. Really nice sweet and fruity flavors start things off. It's quite amazing how much the tropical mango and tangerine and pineapple really stand out!

Next, an awesome spicy and hoppy bite comes to take a chuck from that initial sweetness. The alcohol is noticeable but really great at bringing out the fruits as well as some bread dough and caramel nuances. Did I mention that the tropical aspect is really terrific?

I love how the sweetness and bitterness work together, yet not in a way that blends them to neutral. Each is distinct and ping-pongs back and forth off the other. Nice warmth at the finish from the alcohol as well, as I indeed wanted an alcoholic drink. That's about it except that this beer was great. Again, thanks to my new friend. And for sure check out this beer if you are able!

Posted by Beer Drinker Rob at 9:27 AM