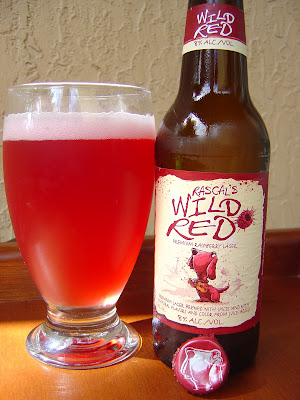 Today I'm drinking Rascal's Wild Red, a "premium raspberry lager" brewed by Blue Dawg Brewing in Baldwinsville, New York. So Bud finally put out a new version of their Wild Blue mess, huh? There is a red dog on the label playing a guitar. I'm guessing that might be Rascal.

There is an enormous aroma, even on the wind, as I opened it outside. I filled my glass with the most fluorescent red-pink neon liquid this side of a radioactive glow you've ever seen. The smell is sickeningly sweet, and oh yes full of raspberries. These raspberries are unnatural, hitting manufactured impossible fruity flavors. So far, this sucks.

Well, there are definitely raspberry flavors, but they are sugary sweet and obnoxious. Overly concentrated nonsense! Seriously, this tastes super-fake, even plastic. The 8% alcohol tries to hide behind the sweetness, but after a few sips, it rears its ugly head too. So what we have here is a "beer" that is fairly high in alcohol content, is fairly inexpensive and has a sweetness that tries to mask said alcohol. I wonder who would drink such a drink?

Dump. Not even Wild Blue was this horrid. I used my bathroom sink as I'm hoping this will strip that gunky shit right out of the drain. Why don't these guys just try to brew good beer? Prediction: this awful crap will be off the market by Labor Day. And then at least Poor Rascal might not need to sing the Blue(Dawg)s!

PS. I already finished another beer since dumping most of this shit. Then I burped and still tasted that raspberry crap full force. Ugh!

Wish I'd read this before buying a six. Finished the first and sought out reviews to see if I got a bad batch. Not. Any recommendations for a good raspberry brew? Need to mix it up a bit.

Sorry. This is a "beer" made for people that want masked 8 % alcohol. (that's the nice way to put it). My suggestion is skip Bud products, including all of the "Wild" fancy label cheaper options. Raspberry is tough, but if you can let me stretch that to "berry"...

Be sure to report back if you try those.

Sorry, but I disagree with you. I thought Rascals Wild Red was really very good. I am not a beer drinker, but I found the taste quite pleasing. Maybe it is because it was so sweet. I would definitely purchase it again.

I challenge you to try any of the other real craft beers I mentioned in my comment above and compare.

Lindemans Framboise Lambic, from Belgium. Pricey but worth it. Best served in a champagne flute if you don’t have a lambic glass handy.