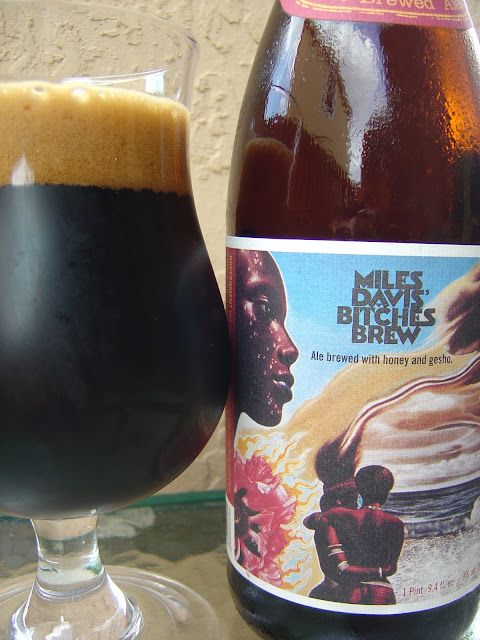 Today I'm drinking Miles Davis' Bitches Brew brewed by Dogfish Head Craft Brewery in Milton, Delaware. The stamp on the wine-sized bottle says Bottled in 2010 F, when I bought this beer after it was first released. I checked back for some date information and was reminded that this was first introduced at SAVOR back in June, 2010. Dogfish has brewed it at least one additional time since then, but it's not on the shelves very often. I'm not sure how I managed not to drink it for two years, but yeah!!!

OK. So I know all you guys already know everything, but bear with me as I recap the story on the side of the bottle. Basically, this beer was created to commemorate the 40th Anniversary of Miles Davis' album Bitches Brew. Three threads imperial stout were combined with one thread honey beer with gesho root. I'll let you read the rest to understand where the musical and brewing genius overlaps. The label also encourages aging. Whew!

Luckily for you, I won't try to interpret the art work on the label. I think it's totally cool and probably hundreds of others have already done that. The name and art on the label were used by Dogfish with the permission of Sony Music. I guess it's just about time I get my hands on this album, no? LOL. Here we go with the beer!

Wonderful chocolate aroma with caramel and brown sugar underneath. Hints of vanilla, sweet honey, milky, luscious. The flavors start out similarly. Chocolate and brown sugar come first and mingle with some very sweet honey. Roasted coffee and a bit of smoke come next.

Big body, thick and viscous, with a creamy smooth texture, not unlike a really nice milk stout. After a handful of sips, there are some nutty and earthy components. I'm not sure what gesho root is, but maybe that provides the coffee or earthy or smoky aspects. I don't know. Whatever, so far, pretty yummy.

Hints of vanilla and molasses. The coffee flavors and some roasted bitterness do provide a bit of relief from the sweetness, though this remains totally sweet throughout. Alcohol? What 9% alcohol? I can't speak for this beer right after bottling, but I taste no alcohol in this seemingly NA beer. Carbonation is there but low. You will get used to the richness, especially if you drink the entire wine bottle alone. I do wish there were a little bit more balance for the sweetness, but I'll be damned if this wasn't just terrific! Bitchin'!

We had bought two Bitches Brew. We drank one the day we bought it and it reminded me of sweet tobacco. You could almost imagine yourself listening to jazz musicians surrounded with people smoke pipes and fine cigars.
The aged bottle from our fridge seemed to make ours a little smokier, and less of the tobacco but still rich and complex coffee, chocolate and sweet similar to how I do my marshmallows - very toasted to black on the outside and sweet marshmallow on the inside. :)
I hope Dogfish Head does this one again.

Wow, that's poetry. I enjoyed my bottle and would drink it again for sure.