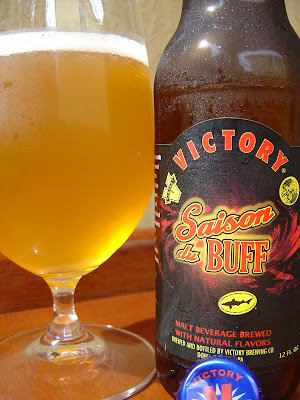 Today I'm drinking Saison du Buff brewed by Victory Brewing Company in Downingtown, Pennsylvania. You probably remember that this is a collaboration beer between Victory, Dogfish Head and Stone, with each brewing their own batch of the beer. I tried that Dogfish Head version a month or so ago and recently saw this one on the shelves at Total Wine.

The label is different. The focal point on this label is some glowing red and orange grain stalks. To the side are two stories from the "brothers of Buff" about their collaboration. Both stories focus on this being "a bottle full of love". Sam went on to hand-write his own introduction to the beer, describing it as "hellaciously herbaceous" while giving props to Victory and Stone at the same time. He signed it with one of those cutesy little hearts too. How adorable! LOL.

Quite the herbal aroma, expected, but that doesn't diminish its power. It also has a nice floral quality to it. It kind of reminds me of Dogfish Saison du Buff. Wait a second! Did you see what I just did there? Anyway, if my memory serves me right, the aroma on this version is a little less in your face than the Dogfish one.

Herbal flavors kick things off, too, though it's tough to pick them out individually. Parsley, rosemary, let's just say Herbes de Provence. They do make you think of tea as well. Next up, some hoppy lemon, a little grassy and tart as well. After drinking a few sips, you will start to taste the funky, yeasty saison qualities. Hay, wet blanket with a soapy consistency. The funk becomes the driving force by the end.

Overall, I liked this about the same as the Dogfish version, though I definitely felt this was a little different. I thought the Victory version showed less herbal qualities yet had way more funk. And at the same time, there was more lemony citrus in this version. Check them out and let me know your thoughts! 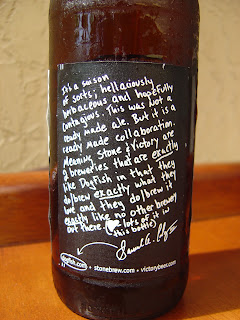 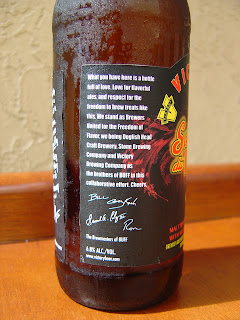 I've had a chance to try both, too. They are both so good. The Dogfish version reminded me of a pleasant dinner. I could easily drink it with chicken or fish or add it to some chicken soup! I was pleasantly surprised that there are some differences between the two which makes me really excited to search for the Stone version and taste it.