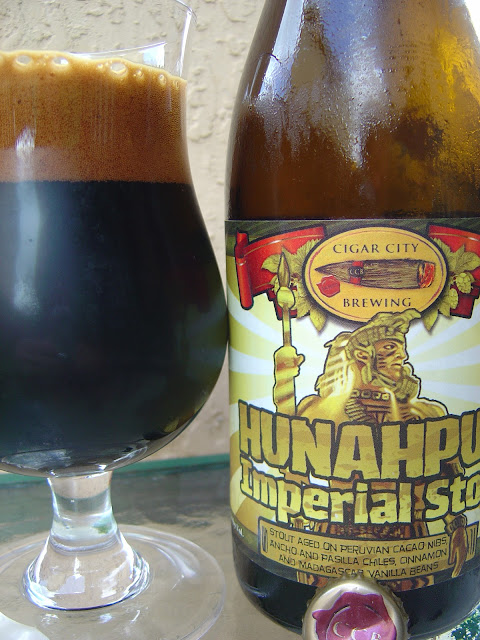 Today I finally opened my bottle of Hunahpu's Imperial Stout brewed by Cigar City Brewing in Tampa, Florida. Ed Roberts grabbed this 2011 bottle for me last year when it was released, and it's been sitting comfortably in a Bacardi box in the corner ever since. I guess if I need a reason for the season, it is my brother's birthday (though he is 1000 miles away and I might not even call him, LOL).

So, yeah. This is the famous Hunahpu's Imperial Stout. It is so famous that I bought the website domain name when I first acquired the bottle. If any of you are super fans and can think of something better than I could create, make me an offer for it. http://www.hunahpu.com/

The wine-sized bottle has a depiction of Hunahpu on the front and was designed by Juan Alvarez of Humblewear.com. The front and side panels both let you know that this stout is aged on Peruvian cacao nibs, ancho and pasilla chiles, cinnamon and Madascar vanilla beans. Sounds fabulous to me!

Awesome color, especially the mocha brown head. And OMG, this is one of the most fabulous beer aromas ever. Smells like rainbows made from puppy kisses! (Feel free to quote me on that.) Sweet milk chocolate comes first, overlapped by some nice spicy chiles and a good dose of cinnamon. Hints of vanilla and licorice also do not escape the nose. Pure love.

Sweet chocolate flavors start and are immediately followed by some lightly bitter roasted coffee. Good balance. Spicy cinnamon comes next, very noticeable, and all of those flavors are trailed by a low-grade chile-pepper heat/burn. Thick body. Low carbonation.

The chocolate is not as powerful as the aroma suggested and definitely not as sweet. With each sip, the peppery heat builds, though never gets annoying. Underneath the main advertised flavors, which really are the stars, plenty of prune and cherry flavors pop. It's like they were brought forth by Hunahpu himself (that is a euphemism for the 11.5% alcohol, right?).

The alcohol is very well disguised, and though the finish is spicy and heated, I'd attribute that to the peppers and not the alcohol. The finish and aftertaste show some peppery and vegetal flavors that are not awesome, and though they do linger, it's not a total turnoff. Overall, you have a complex, interesting, flavorful beer. I'm glad I finally tried it and it's definitely pretty cool that people worship one of our local beers!
Posted by Beer Drinker Rob at 1:40 PM