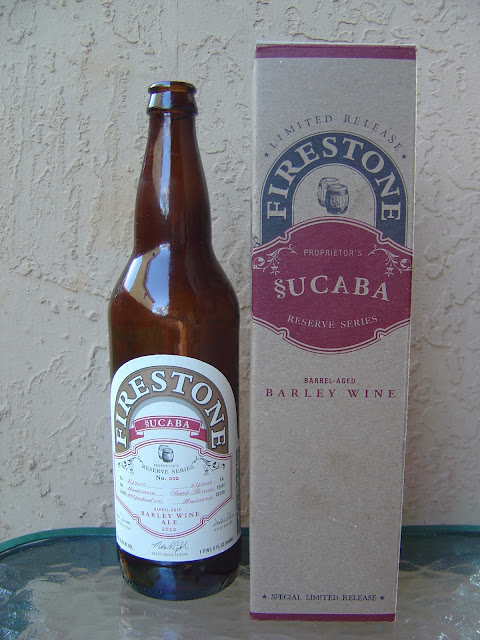 A few days ago, Ed Roberts brought his family over to the house for some burgers and BBQ chicken. Ask Ed about the security procedure at the community where I live, LOL. He also brought two really nice beers. §ucaba, a barrel-aged barley wine brewed by Firestone Walker Brewing Company in Paso Robles, California, was the dessert of the evening (before Ed had me try some Angel's Envy Bourbon, that is).

Ed let me know that this beer used to be called Abacus. Apparently that name was already taken, so the brewery turned the name around to Sucaba and craftily changed the S into the Section Sign. Let's see any other beer makers claim to have this name already! (Prince isn't making beer now is he?).

This 22 ounce bottle comes packaged in its own box, part of their Proprietor's Reserve Series. Actually the bottle says it's No. 002 in that series. An informative story on the back of the box let's you know that after ten years in business, Firestone Walker started a barrel aging program, around 2006. Each year they have released limited amounts of some of those beers on draft, and apparently this one was so popular that they bottled it.

§ucaba is a barrel-aged barleywine, aged 11 months in barrels that used to hold spirits, wines and other beers. The story concludes with some expectations and is signed by Adam Firestone, David Walker and Matt Brynildson. The bottle is elegant as well, not flashy at all, and provides all the stats for the beer. 2012.

So after the smoky BBQ was turned off and the burgers were consumed, we tasted this beer. The kids were busy doing their own review of a cream soda, getting a mega sugar fix, followed by basically exhausting themselves over the course of the night.

Before I forget to let you know, there are no pictures of the beer in the glass. Sorry, but don't bother asking. I know you guys have great imaginations though so it shouldn't really matter anyway. WOW! What a fabulous aroma! Toffee, butter, vanilla, sweet baking bouquet. Absolutely awesome.

The flavors, also spectacular. Sweet and smooth delicious beginning. Toffee is definitely the driving flavor of this beer, quite excellent. There are definitely plenty of woody, rum and bourbon-like characteristics there as well. Raisins, molasses, more yum. Rich with some great body with a creamy texture I still dream about a week later. Yes, there is 12.5% alcohol in this guy, but that alcohol is a highlight while at the same time being dangerously well disguised.

Complex, wonderful sipper, and one of the best beers I've ever had! I recently tried a bottle of the world-famous Hunahpu, and this beer, well, did one of those reverse Flying Triangle Choke MMA submission things on that beer. Even my wife loved this beer.. "Now this I like!" and she said that after almost spitting out the Cantillon we had earlier in the night. Mmmmmmmmmmmmmmmmmmmmmmmmmmm. 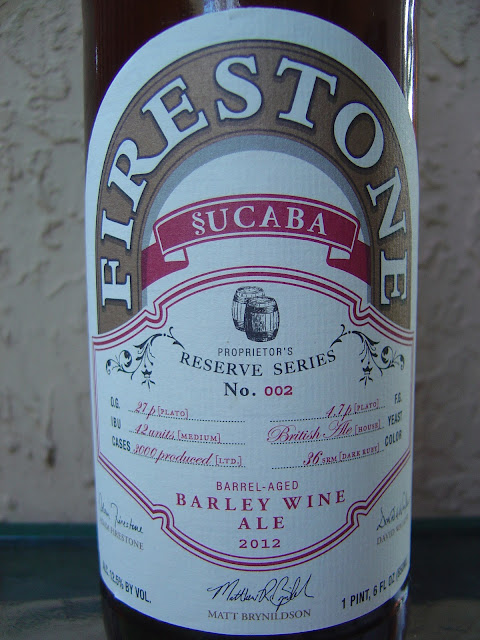 THANK YOU! I've been dying to know what this beer is like and you have satisfied my curiosity. However, you have NOT satisfied my desire to taste it, to which I will still hold you accountable. :)

Yeah, sorry. You'll have to seek out your own bottle, which is highly recommended.